The Song of Hiawatha facts for kids 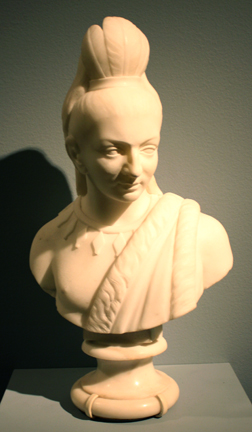 The Song of Hiawatha is an epic poem written by Henry Wadsworth Longfellow. It was first published in 1855. The poem was loosely based on the legends of Native American peoples. In 1857, Longfellow estimated that the work had sold 50,000 copies.

The Song is about Hiawatha and his beloved Minnehaha. It is set along the south shore of Lake Superior. The poem was very popular, but critics did not like it.

Hiawatha's birth is foretold by a "mighty" peace-bringing leader named Gitche Manito. A woman named Nokomis falls from the moon. Nokomis gives birth to Wenonah. She grows to be a beautiful young woman. She and the West Wind had a baby called Hiawatha.

Hiawatha has childhood adventures, falls in love with Minnehaha, slays the evil magician Pearl-Feather, invents written language, discovers corn, and other episodes. The poem closes with the approach of a canoe to Hiawatha's village. It contains "the Priest of Prayer, the Pale-face." Hiawatha welcomes him with joy.

The "Black-Robe chief" brings word of Jesus Christ. Hiawatha and the chiefs accept the Christian message. Hiawatha says good-bye to Nokomis, the warriors, and the young men. He says, "But my guests I leave behind me / Listen to their words of wisdom, / Listen to the truth they tell you." He endorses the Christian missionaries. He launches his canoe for the last time westward toward the sunset. Then he departs forever.

All content from Kiddle encyclopedia articles (including the article images and facts) can be freely used under Attribution-ShareAlike license, unless stated otherwise. Cite this article:
The Song of Hiawatha Facts for Kids. Kiddle Encyclopedia.