The Como-Harriet Streetcar Line (CHSL) is a heritage streetcar line in Minneapolis, Minnesota, which follows original streetcar right-of-way between Lake Harriet and Bde Maka Ska and is operated by the Minnesota Streetcar Museum. The heritage line was originally developed in the 1970s by the Minnesota Transportation Museum which spun off streetcar operations in the winter of 2004-2005.

When Twin City Rapid Transit ceased streetcar operations in 1954, they donated two of their old wooden streetcars to railfan groups. One of the groups receiving a streetcar (TCRT No. 1300) was the Minnesota Railfans Association, which organized railfan trips from the 1940s-1960s. TCRT No. 1300 was stored outside until it was acquired by the Minnesota Transportation Museum in 1962 and restoration began. By 1963, the car had been restored to operational status. It originally made only some short trips along track at a roundhouse in St. Paul owned by the Minnesota Transfer Railway. Because there were no overhead electric lines at this location, the streetcar had to be powered by an electric generator towed behind the car. Despite these shortcomings the car was extremely popular with the public.

Since public interest was so high, the museum examined options for regular operation of No. 1300. The City of Minneapolis and the Minneapolis Park and Recreation Board had acquired the original streetcar right-of-way between Lake Harriet and Lakewood Cemetery near Lake Calhoun and in 1970, the Minnesota Transportation Museum leased the land.

On August 28, 1971, after track had been laid and a small carbarn constructed under the Queen Avenue Bridge, which passed over the original right-of-way, public operations began. Because no overhead wires had been strung to provide electricity the trailer mounted electrical generator continued to be used until the overhead electrical system was completed in 1973.

Continued popularity of the heritage line allowed the museum to expand from about one city block of track in 1971 to more than one mile of track. By 2005 continuous use had taken its toll on the track and a rebuilding project funded by a federal TEA-21 grant took place. Over time more streetcars were acquired and restored by the museum. Three different streetcars can be seen in operation on the Como-Harriet line, although only one or two are run at any given time. The line is listed on the National Register of Historic Places. 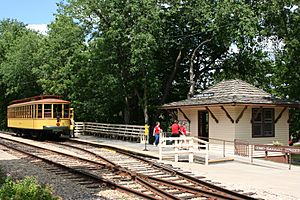 The original streetcar station at Linden Hills was built one block north of the intersection of Queen Ave and 42nd Street in 1900. As time progressed TCRT desired to make Lake Harriet an entertainment destination in an effort to increase recreational ridership. At this time they built the original Lake Harriet Bandshell and began sponsoring concerts at the lake. Because of the larger crowds being drawn to the lake, there was a need for a larger station, and in 1914 a larger chalet-style structure replaced the original building, which was moved closer to the lake and used for other purposes. The chalet station existed until 1954 when streetcar operations ceased at which time it was torn down.

By the time the Minnesota Transportation Museum began construction of the heritage line, all that remained was the concrete slab used as a platform for loading and unloading passengers. In 1990, the Museum built a recreation of the smaller original Linden Hills Station. Today, the station is used for purchasing tokens to ride the streetcars, souvenirs and contains displays of Twin City Lines History. 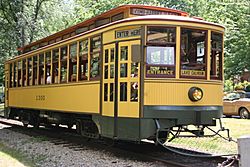 The first streetcar operated by the Museum was Twin City Rapid Transit Company streetcar No. 1300. The car, which now appears much like it did in the 1930s-1950s era, was built by Twin City Rapid Transit as a fast interurban streetcar in 1908, with a top speed of about 35 miles per hour (56.35 km/h). When in operation for Twin City Lines TCRT No. 1300 was based at the East Minneapolis Station (carbarn) and often operated on the original Como-Harriet route.

In 2003, TCRT No. 1300 underwent extensive overhauling of its internal wiring, exterior, and internal wood and steel support structure as it hadn't had a major overhaul/rebuilding since the late 1940s. This was done for preparation for its 100th birthday in 2008. 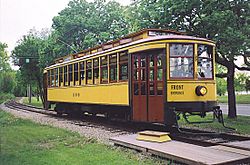 Other streetcars were also added in later years. A streetcar once operated on the TCRT-operated Duluth streetcar system was put in service on CHSL after nine years of restoration work in 1982. It had originally been built in 1915 by TCRT as No. 1791, but was sold to Duluth the next year. It operated there until Duluth's streetcar system was abandoned in 1939. The car was then sold and converted into a summer cabin in Solon Springs, Wisconsin, a fate that was not unusual for old wooden streetcars that managed to escape being burned up as streetcar lines abandoned. The interior had been removed, so important pieces like the railroad trucks, the electric wiring and other parts had to be scavenged from other old streetcars or built from scratch. 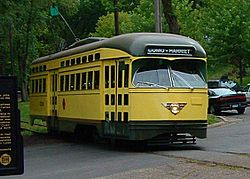 TCRT built most of its own streetcars in its own shops (31st Street in Minneapolis from 1898 through 1907 and Snelling in Saint Paul from 1907 through the late 1920s) throughout the company's history. But a number of faster streamlined vehicles were purchased in the late 1940s to better compete with the popularity of the automobile. TCRT No. 322 was a Presidents' Conference Committee, or PCC streetcar built by the St. Louis Car Company in 1946. It served in the Twin Cities until it was sold in 1953 to Public Service Coordinated Transit in New Jersey, one of thirty streetcars purchased for use in the Newark City Subway. It was later sold to the Shaker Heights Rapid Transit in Cleveland, Ohio in 1978 to replace two wreck-damaged cars. After the car was acquired by the Museum in 1990, it underwent ten years of restoration, entering service in 2000.

All content from Kiddle encyclopedia articles (including the article images and facts) can be freely used under Attribution-ShareAlike license, unless stated otherwise. Cite this article:
Como-Harriet Streetcar Line Facts for Kids. Kiddle Encyclopedia.