Father Louis Hennepin, O.F.M. baptized Antoine, ( 12 May 1626 – 5 December 1704) was a Belgian Roman Catholic priest and missionary of the Franciscan Recollet order (French: Récollets) and an explorer of the interior of North America.

Antoine Hennepin was born in Ath in the Spanish Netherlands (present-day Hainaut, Belgium). In 1659, while he was living in the town of Béthune, it was captured by the army of Louis XIV of France. Henri Joulet, who accompanied Hennepin and wrote his own journal of their travels, called Hennepin a Fleming (a native of Flanders), although Ath was and still is a Romance-speaking area found in present-day Wallonia. Joulet's use of the term "Fleming" here denotes a lack of understanding or generalization of this demonym, which was common at that time. 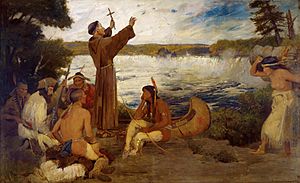 Hennepin joined the Franciscans, and preached in Halles (Belgium) and in Artois. He was then put in charge of a hospital in Maestricht. He was also briefly an army chaplain.

At the request of Louis XIV, the Récollets sent four missionaries to New France in May 1675, including Hennepin, accompanied by René Robert Cavelier, Sieur de la Salle. In 1676 Hennepin went to the Indian mission at Fort Frontenac, and from there to the Mohawks.

In 1678, Hennepin was ordered by his provincial superior to accompany La Salle on an expedition to explore the western part of New France. Hennepin departed in 1679 with La Salle from Quebec City to construct the 45-ton barque Le Griffon, sail through the Great Lakes, and explore the unknown West.

Hennepin was with La Salle at the construction of Fort Crevecoeur (near present-day Peoria, Illinois) in January 1680. In February, La Salle sent Hennepin and two others as an advance party to search for the Mississippi River. The party followed the Illinois River to its junction with the Mississippi. Shortly thereafter, Hennepin was captured by a Sioux war party and carried off for a time into what is now the state of Minnesota.

In September 1680, thanks to Daniel Greysolon, Sieur Du Lhut, Hennepin and the others were given canoes and allowed to leave, eventually returning to Quebec. Hennepin returned to France and was never allowed by his order to return to North America. Local historians credit the Franciscan Récollet friar as the first European to step ashore at the site of present-day Hannibal, Missouri.

Two great waterfalls were brought to the world's attention by Hennepin: Niagara Falls, with the most voluminous flow of any in North America, and the Saint Anthony Falls in what is now Minneapolis, the only natural waterfall on the Mississippi River. In 1683, he published a book about Niagara Falls called A New Discovery. The Regionalist painter Thomas Hart Benton created a mural, "Father Hennepin at Niagara Falls" for the New York Power Authority at Lewiston, New York. 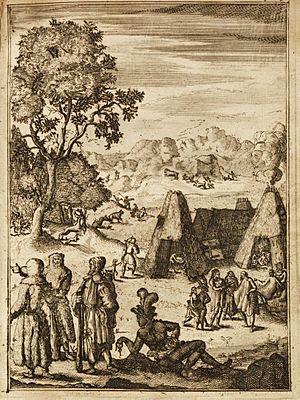 Illustration from the 1688 Dutch edition of Description de la Louisiane

The truth of much of Hennepin's accounts has been called into question — or flatly denied — notably by American historian Francis Parkman (Parkman has also been accused of bias, etc.).

Hennepin has been denounced by many historians and historical critics as an arrant falsifier. Certain writers have sought to repel this charge by claiming that the erroneous statements are in fact interpolations by other persons. The weight of the evidence is however adverse to such a theory.

Places named after Hennepin are found in the United States and Canada: 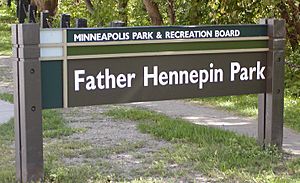 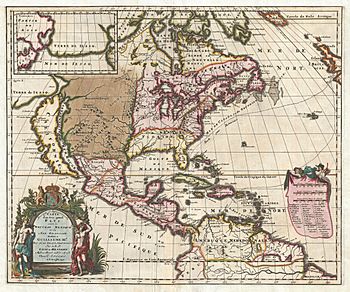 All content from Kiddle encyclopedia articles (including the article images and facts) can be freely used under Attribution-ShareAlike license, unless stated otherwise. Cite this article:
Louis Hennepin Facts for Kids. Kiddle Encyclopedia.