Hannibal is a city in Marion and Ralls counties in the U.S. state of Missouri. Interstate 72 and U.S. Routes 24, 36, and 61 intersect in the city, which is located along the Mississippi River approximately 100 miles (160 km) northwest of St. Louis. According to the 2010 U.S. Census, the population was 17,606, making it the largest city in Marion County.

Hannibal is not the county seat, but it has one of two county courthouses. There is also one in Palmyra, the county seat, which is located more in the center of the county. This is the principal city of the Hannibal, Missouri micropolitan area, which consists of both Marion and Ralls counties. 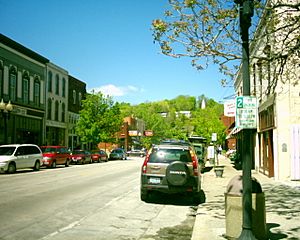 The site of Hannibal was long occupied by various cultures of indigenous Native American tribes.

The river community is best known as the 19th-century boyhood home of author Samuel Langhorne Clemens (aka Mark Twain). The settings of Twain's novels The Adventures of Tom Sawyer and Adventures of Huckleberry Finn are inspired by this town. Numerous historical sites are associated with Mark Twain and places depicted in his fiction.

Hannibal draws both American and international tourists. The Mark Twain Boyhood Home & Museum marked its 100th anniversary in 2012 and has hosted visitors from all fifty states and some sixty countries. Most Hannibal residents enjoy the visitors, and the town at large benefits from tourism revenue.

After the Louisiana Territory was acquired by the United States in 1803, European-American settlers began to enter the area. The town was laid out in 1819 by Moses Bates and named after Hannibal Creek (now known as Bear Creek). The name is ultimately derived from the hero of ancient Carthage, Hannibal. Although the city initially grew slowly, having a population of 30 by 1830, its access to the Mississippi River and railroad transportation fueled growth to 2,020 by 1850. It annexed the town of South Hannibal in 1843. Hannibal gained "city" status by 1845.

Based on the important river steamboat traffic and trade, Hannibal was Missouri's third-largest city when the Hannibal and St. Joseph Railroad was organized in 1846 by John M. Clemens (Mark Twain's father) and associates. It was built to connect to St. Joseph, Missouri in the west, then the state's second-largest city. This railroad was the westernmost line before the Transcontinental Railroad was constructed. It transported mail for delivery to the first outpost of the Pony Express.

The city has served since then as a regional marketing center for livestock and grain as well as other products produced locally, such as cement and shoes, throughout the remainder of the 19th century and on to the present time. Cement for the Empire State Building and Panama Canal was manufactured at the Atlas Portland Cement Company in the nearby unincorporated company town of Ilasco.

The Mark Twain Memorial Lighthouse was constructed in 1933 during the Great Depression, as a public works project under President Franklin D. Roosevelt. It has been lit on ceremonial occasions at three separate times by presidents Franklin Delano Roosevelt, John F. Kennedy, and Bill Clinton. Rockcliffe Mansion, a private house located on a knoll in Hannibal, is listed on the National Register of Historic Places.

In 2011, the Mark Twain Boyhood Home and Museum released a CD featuring entertainers who tell Mark Twain's life in spoken word and song: Mark Twain: Words & Music. Several songs were written especially for the project and refer to Hannibal, including "Huck Finn Blues" sung by Brad Paisley and "Run Mississippi" sung by Rhonda Vincent. Other artists include Jimmy Buffett as Huckleberry Finn, Clint Eastwood as Twain, and Garrison Keillor as the narrator for the project. 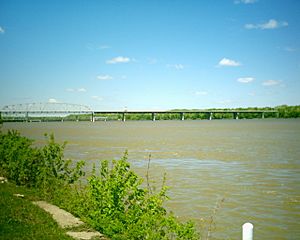 The Mississippi River at Hannibal

Hannibal's climate is characterized as being humid continental, with cold, snowy winters, and hot, humid summers.

The Hannibal Micropolitan Statistical Area is composed of Marion and Ralls counties.

There were 7,117 households of which 31.3% had children under the age of 18 living with them, 43.2% were married couples living together, 14.5% had a female householder with no husband present, 4.2% had a male householder with no wife present, and 38.2% were non-families. 31.6% of all households were made up of individuals and 13% had someone living alone who was 65 years of age or older. The average household size was 2.36 and the average family size was 2.96.

There were 7,017 households out of which 32.5% had children under the age of 18 living with them, 48.0% were married couples living together, 13.6% had a female householder with no husband present, and 35.1% were non-families. 30.6% of all households were made up of individuals and 15.0% had someone living alone who was 65 years of age or older. The average household size was 2.40 and the average family size was 2.98.

Interstate 72 was extended into Hannibal in 2000 from Illinois across the Mark Twain Memorial Bridge. Interstate 72 extends west to the intersection with U.S. Route 61. Future plans call for extending Interstate 72 west along U.S. Route 36 to Cameron, Missouri. This will give Hannibal an east-west link connecting Kansas City to Springfield, Illinois. U.S. Route 61 goes from Saint Louis in the south to Saint Paul, Minnesota; it is known as the Avenue of the Saints corridor.

Hannibal Regional Airport (formerly Hannibal Municipal Airport) was renamed in 2003 as William P. Lear Field, in honor of Lear. He grew up in Hannibal and invented the Lear Jet. The airport is located 4 miles (6.4 km) west of the southern area and has one runway 4,400' x 100'. 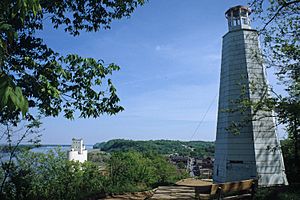 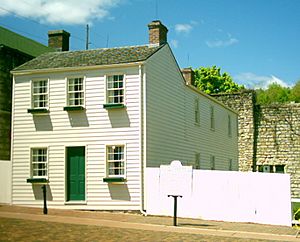 Mark Twain's boyhood home is open to the public

All content from Kiddle encyclopedia articles (including the article images and facts) can be freely used under Attribution-ShareAlike license, unless stated otherwise. Cite this article:
Hannibal, Missouri Facts for Kids. Kiddle Encyclopedia.