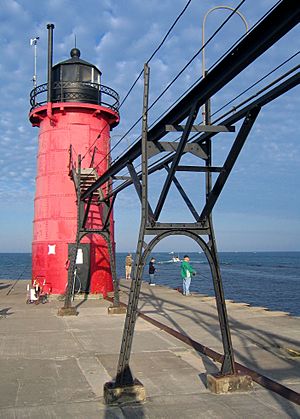 South Haven is a city in the U.S. state of Michigan. Most of the city is in Van Buren County, although a small portion extends into Allegan County. The population was 4,403 at the 2010 census.

Because of its position on Lake Michigan, at the mouth of the Black River, South Haven has always been a port city. During settlement, major ship lines stopped there, both passenger and freight. In the early 1900s South Haven became a resort town, sometimes referred to as "The Catskills of the Midwest". South Haven is a major regional tourist draw because of its recreational harbor and beaches. It is the western terminus of the Kal-Haven Trail, popular with bicyclists and snowmobilers. Nearby are Van Buren State Park and the Van Buren Trail State Park.

Noted botanist Liberty Hyde Bailey was born in South Haven. His childhood home was presented to the city in the 1930s, and is now a museum.

Prior to colonization by white settlers, the area was inhabited at different times by Potawatomi and Iroquois native people. In 1833, the U.S. government granted Jay R. Monroe a land patent for 65 acres of land along the shore of Lake Michigan. In the 1850s the first permanent settlers arrived, and early in the decade the first steam sawmills were built on the Black River. About this time, the settlement gained its first merchant, physician, lawyer, and minister, and the first schoolhouse was built. The first bank was organized in 1867. South Haven was incorporated as a village in 1869, and as a city in 1902.

In 1853, the first hotel in South Haven, known as the Forest House, was built at the corner of Phoenix and Center Streets. The building was subsequently moved a few doors south and still stands, though greatly modified, and no longer used as a hotel.

The timber harvested in South Haven was shipped to Chicago and Milwaukee via steamboats and schooners, and the cleared forests were then used by fruit farmers, who primarily grew peaches, blueberries and apples. The farming industry created many jobs in the area, and the city began to boom. Around the early 1900s, theaters, a casino, an opera house, an amusement park, and many resorts contributed to a rise in popularity of the city. Being a resort city resulted in a seasonal economy, however, and in an effort to stabilize the economy, the city's board of trade successfully recruited several different industries to the area.

In 1925, the first foreign shipments of goods arrived, beginning an era of foreign shipments that would last until the mid-1960s. The last passenger steamboat left South Haven for Chicago on Labor Day, 1941, though recreational boating increased steadily. In the 1950s and 1960s several new factories came to the area, and although the resort businesses in the area began to flounder, the resorts that remained grew stronger.

In 1969, "The Centennial Celebration and Blueberry Festival" took place, and the city's 64-slip marina was dedicated. To this day the Blueberry Festival continues to draw many visitors to the city. Other events, such as the Ice Breaker Festival, Harborfest, the art shows and 4 July fireworks display remain very popular. The beaches, boating and relaxing atmosphere will continue to ensure that the City of South Haven remains a popular warm-weather destination. The South Pier Lighthouse, built in 1903 to replace the light established in 1872, is still operational, and is accessible from a public beach.

South Haven is home to a public school district as well as Roman Catholic and Lutheran parochial grammar schools. In addition, Western Michigan University and Lake Michigan College, a junior college, have branch campuses located within the city. The city has annexed portions of South Haven Township, Van Buren County and a small portion of Casco Township, Allegan County. 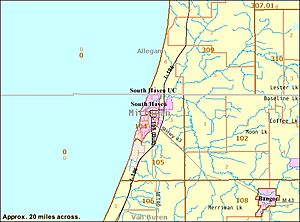 South Haven has either a borderline mild-summer humid continental climate (Köppen climate classification Dfb) if the −3 °C (26.6 °F) isotherm is used or a borderline oceanic climate (Köppen climate classification Cfb) if the 0 °C (32.0 °F) isotherm is used. The latter is a highly atypical climate type for the American East, particularly for a location far inland of the east coast of the United States, little influenced by the waters of the Atlantic Ocean. The effect is the result of a microclimate created by the moderating influence of Lake Michigan. 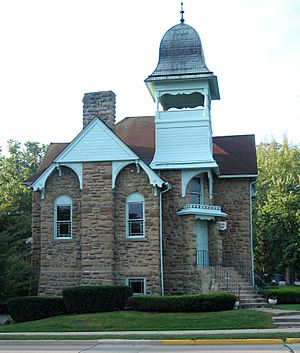 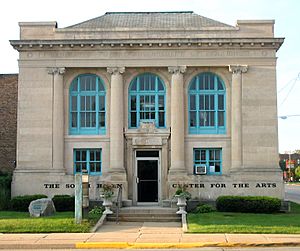 The Scott Club on Phoenix St. was designed by South Haven architect John Cornelius Randall and constructed in 1891. The club house has two large stained glass windows portraying Sir Walter Scott and Henry Wadsworth Longfellow. The South Haven Center for the Arts is housed in the 1906 neoclassical Carnegie Library, also on Phoenix St. 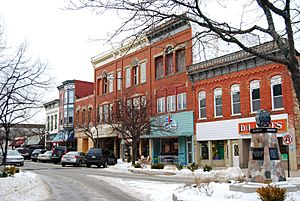 There were 1,959 households of which 24.5% had children under the age of 18 living with them, 39.6% were married couples living together, 15.0% had a female householder with no husband present, 3.0% had a male householder with no wife present, and 42.5% were non-families. 36.9% of all households were made up of individuals and 15.6% had someone living alone who was 65 years of age or older. The average household size was 2.17 and the average family size was 2.80.

There were 2,095 households out of which 27.8% had children under the age of 18 living with them, 47.4% were married couples living together, 12.7% had a female householder with no husband present, and 36.5% were non-families. 31.7% of all households were made up of individuals and 14.1% had someone living alone who was 65 years of age or older. The average household size was 2.30 and the average family size was 2.90. 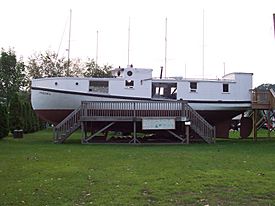 The Evelyn S., a Great Lakes fish tug at the Michigan Maritime Museum

South Haven offers an interesting array of cultural attractions. The Michigan Maritime Museum, host of the tall ship Friends Good Will, is perhaps its most famous. The Michigan Maritime Museum also hosts an electrically powered river launch called the Lindy Lou. River launch boats were used in the 1890s to the 1930s to ferry passengers up the Black River to various resorts and parks. Visitors are able to buy tickets to ride either ship - the Lindy Lou stays on the river, while the Friends Good Will goes down the river and onto Lake Michigan.

The Historical Association of South Haven, which now operates out of the old Hartman School, which it is refurbishing, is devoted to documenting and retelling the city's rich history.

The Michigan Flywheelers Museum allows visitors to experience the life of early local farmers. Attractions include exhibits of antique flywheel engines and tractors, an old town area with an old jail, farm machinery shop and an exhibit building called "The Farm History Building".

During the winter months the city's ice rink is open. There is a daily fee for entrance and for rental skates, and also season passes are available.

A staple restaurant in the heart of South Haven is Clementine's. The building was originally a bank but has since been renovated into a restaurant.

All content from Kiddle encyclopedia articles (including the article images and facts) can be freely used under Attribution-ShareAlike license, unless stated otherwise. Cite this article:
South Haven, Michigan Facts for Kids. Kiddle Encyclopedia.