The county was named for Martin Van Buren before he became president. He was U.S. Secretary of State and later Vice President under President Andrew Jackson, and thus Van Buren is one of Michigan's "Cabinet counties".

Much of the county is farmland dotted with small towns. Areas near Kalamazoo County are becoming suburbanized. Many of the inland lakes are ringed with homes, either by people living year-round or cottagers, generally people who live the rest of the time in Chicago. Tourism is a major industry in the areas near Lake Michigan. 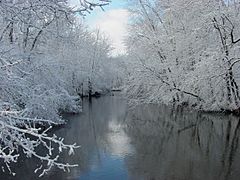 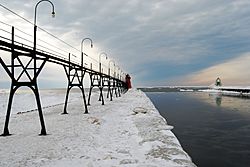 All content from Kiddle encyclopedia articles (including the article images and facts) can be freely used under Attribution-ShareAlike license, unless stated otherwise. Cite this article:
Van Buren County, Michigan Facts for Kids. Kiddle Encyclopedia.