Lake County is situated in the northeastern corner of the U.S. state of Illinois, along the shores of Lake Michigan. As of the 2020 census, it has a population of 714,342, making it the third-most populous county in Illinois. Its county seat is Waukegan, the tenth-largest city in Illinois. The county is primarily suburban, with some urban areas and some rural areas. Due to its location, immediately north of Cook County, Lake County is one of the collar counties of the Chicago metropolitan area.

According to the 2010 census, Lake County is the second most wealthy county in Illinois by per capita income, after DuPage County. Additionally, Lake County ranks as the 27th wealthiest county in the nation. The lakefront communities of Lake Forest, Lake Bluff, and Highland Park are part of the affluent North Shore area.

Naval Station Great Lakes is located in the city of North Chicago. It is the United States Navy's Headquarters Command for training, and the Navy's only recruit training center. 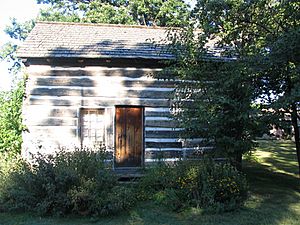 The Caspar Ott Cabin, built in 1837, is the oldest structure in Lake County.

Lake County at the time of its creation in 1839

The county, which was primarily unsettled prairie and was still home to its native Potawatomi Indians, was created by the Illinois State Legislature in 1839. At that time, Libertyville, then known as Independence Grove, was the first county seat. In 1841, however, the county's residents voted to move the county government to Little Fort, now Waukegan, where the commissioners had purchased a section of land from the state. Lake County's first courthouse was built on part of that land in 1844 and the remainder was sold to pay for the $4,000 construction cost.

The county's first courthouse was used solely for court sessions and the jail, but in 1853, commissioners constructed a building to accommodate county administration offices and house records. When fire damaged the courthouse on October 19, 1875, the county records were saved because they were in the adjacent building.

After the fire, proposals were made to move the county seat to Highland Park, Libertyville or another site in central Lake County. The county commissioners, however, decided to rebuild in Waukegan. The east half of the building was reconstructed at a cost of $45,000. In 1895, the first jail building was added to the government complex and a west addition was added to the courthouse in 1922. By 1938, county commissioners saw a need for additional space and approved the addition of a 5th Floor. This courthouse, however, was demolished in 1967 to make room for a new high-rise administration building, which was completed with the addition of the jail in 1969 and courts in 1970.

Shortly thereafter, the Lake County Board commissioned the construction of a multi-faceted justice facility and ground was broken in 1986 for the Robert H. Babcox Justice Center, named in memory of Sheriff Babcox, who served as Lake County Sheriff from 1982-1988. The justice center, which houses the county jail, work release program, sheriff's administration offices and three courtrooms, was finished in 1989 at a cost of $29.6 million.

The historic Half Day Inn, a tavern/restaurant, was constructed in 1843. This structure, once located at the corner of Milwaukee Avenue and Rte. 45/Old Half Day Road, was one of the oldest structures in Lake County until it was demolished in 2007 to make way for retail space, condominiums, and a retention pond. 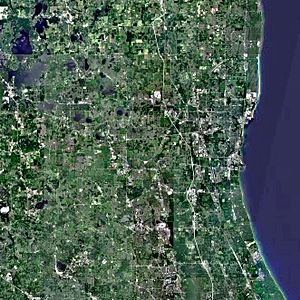 A satellite view of the Lake County district

Besides Lake Michigan, lakes in the county include:

Lake County's forest preserves and natural areas are administered by the Lake County Forest Preserves district. These facilities include traditional nature preserves, such as the Ryerson Conservation Area, as well as golf courses and historic homes, such as the Adlai Stevenson historic home. A long north-south string of the preserves in Lake County, including Half Day Woods, Old School Forest Preserve, Independence Grove, and Van Patten Woods, form the Des Plaines River Greenway, which contains the Des Plaines River Trail, a popular place for walking, running, and biking. Several local environmental groups operate in Lake County, such as Conserve Lake County and Citizens for Conservation, working to improve habitat. Volunteer opportunities also exist with the Lake County Forest Preserve District. 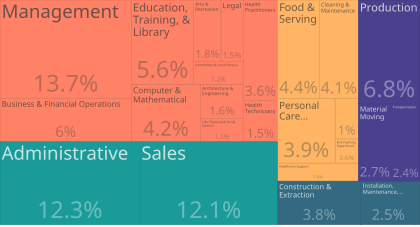 Employment by occupation in Lake County

According to 2019 US Census Bureau American Community Survey one-year estimates (which is conducted annually for cities over 65,000 via sampling), the population of Lake County, Illinois was 74.2% White (60.3% Non-Hispanic White and 13.9% Hispanic White), 6.8% Black or African American, 8.0% Asian, 0.3% Native American and Alaskan Native, 0.1% Pacific Islander, 7.4% Some Other Race, and 3.3% from two or more races. The White population continues to remain the largest racial category as Hispanics in Lake County primarily identify as White (62.1%) with others identifying as Some Other Race (31.7%), Multiracial (3.7%), Black (1.1%), American Indian and Alaskan Native (1.2%), Asian (0.2%), and Hawaiian and Pacific Islander (0.1%). By ethnicity, 22.4% of the total population is Hispanic-Latino (of any race) and 77.6% is Non-Hispanic (of any race). If treated as a separate category, Hispanics are the largest minority group in Lake County, Illinois.Majority of Hispanic/ Latino residents in Lake County, Illinois are of Mexican descent. Puerto Ricans, Cubans, Central Americans, and South Americans also reside in Lake County, Illinois. 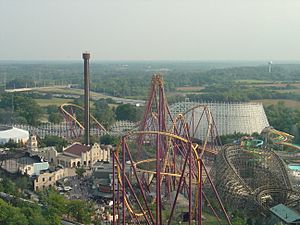 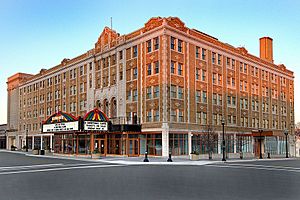 The county is divided into eighteen townships. 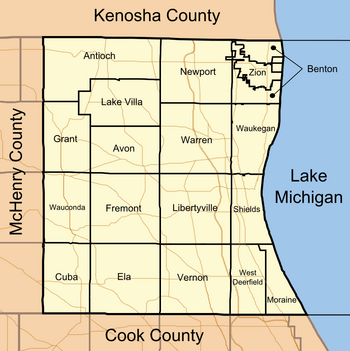 All content from Kiddle encyclopedia articles (including the article images and facts) can be freely used under Attribution-ShareAlike license, unless stated otherwise. Cite this article:
Lake County, Illinois Facts for Kids. Kiddle Encyclopedia.