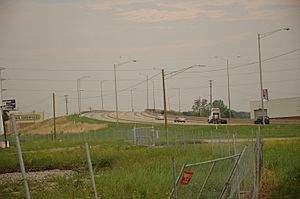 Illinois 43 is called Waukegan Road for the first 20 miles (32 km) until its intersection with Oakton Street in Niles; it then follows that road west one block until it turns back south and remains Harlem Avenue for the duration. When Illinois Route 50 begins in Skokie and Illinois Route 171 begins in Chicago, It parallels those routes for much of the rest of its length. It enters, exits, and runs parallel to Chicago limits several times, passing through or parallel to Edison Park, Norwood Park, Dunning, Montclare, and Austin on the Northwest Side then Garfield Ridge and Clearing on the Southwest Side. Listed as 7200 West in the Chicago address system, it is one of seven state roads that travel through the city of Chicago.

In Deerfield, Route 43 is designated a Blue Star Memorial Highway.

All content from Kiddle encyclopedia articles (including the article images and facts) can be freely used under Attribution-ShareAlike license, unless stated otherwise. Cite this article:
Illinois Route 43 Facts for Kids. Kiddle Encyclopedia.