Niles is a village in Maine and Niles townships, Cook County, Illinois, United States. The 2010 population from the U.S. Census Bureau was 29,803.

The current mayor of Niles is Andrew Przybylo. 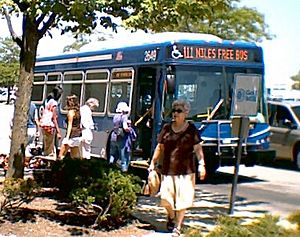 Niles was first settled in 1827. The village of Niles was incorporated on August 24, 1899. The village had a population of 500 people at that time.

Article 4 of the Second Treaty of Prairie du Chien, signed between the United States government and several chiefs of the Chippewa, Ottawa, and Potawatamie left particular tracts of land to individuals of mixed-Native American ancestry. Among these individuals were Billy Caldwell, Victoria Pothier, and Jane Miranda. The land given to these individuals helped for what would eventually established part of the border of Niles. During the 1832 Black Hawk War, there is evidence that one band of Native Americans may have reached Billy Caldwell's property as part of an attempt to reclaim land lost to the United States.

Along with neighboring Skokie and several other suburbs, Niles is partly in Niles Township, from whence it draws its name. It should not be confused with "Niles Center", the original name of Skokie.

There is no clear indication of the origin of the name "Niles." In 1929, the Chicago Tribune ran an article opining that the name was taken from the Niles Register, a newspaper published in the 1820s out of Washington, D.C., and distributed nationally; however, no proof of that has yet been discovered; accounts state only that the name was chosen at public meeting prior to township organization in 1850.

Niles was the first community in Illinois and one of the first in the United States to establish free ambulance service, in 1946.

Niles is adjacent to Chicago to the south, Skokie to the east, Morton Grove to the northeast, Glenview to the north, and Park Ridge and unincorporated Cook County (and portions of Chicago) to the west.

The town is centered along Milwaukee Avenue which forms a main artery diagonally through the town on a northwest-southeast bearing.

The North Branch of the Chicago River flows through the eastern part of the town roughly in a north-to-south direction. 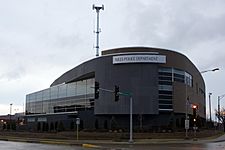 There were 12,002 households out of which 21.9% had children under the age of 18 living with them, 54.0% were married couples living together, 8.5% had a female householder with no husband present, and 33.8% were non-families. 30.6% of all households were made up of individuals and 18.2% had someone living alone who was 65 years of age or older. The average household size was 2.39 and the average family size was 3.01. 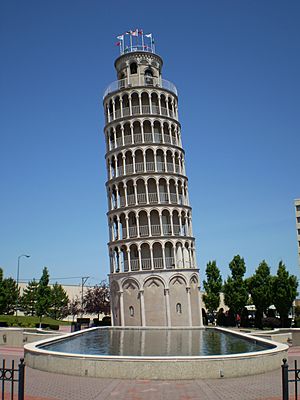 Located on Touhy Avenue, the Leaning Tower is a one–half scale of the real one.

A notable landmark and point of pride among Niles' residents is the Leaning Tower of Niles, a smaller-scale replica of the Leaning Tower of Pisa. This landmark is seen in the opening Chicago-area montage of the film Wayne's World. The Niles Leaning Tower has also been featured in many national magazines including Oprah's "O" Magazine in 2014. It is located next to the local YMCA (which is appropriately called the "Leaning Tower YMCA"). Several concerts covering a variety of musical forms are held here throughout the summer.

Another notable landmark is the Tam O'Shanter Golf Course (today called "The Tam"), which is currently under the ownership of the Niles Park District. From 1941-1957, the course was host to the All American Open on the PGA Tour. In 1964 and 1965, the course hosted the Western Open.

St. Adalbert Cemetery, the largest in the Archdiocese of Chicago in terms of burials, is the resting place of German immigrant Fredrak Fraske (1872–1973), who was the last surviving veteran of the "Indian Wars". St. Adalbert's is also the location of the Halas Family mausoleum, and is the final resting place of George Halas, former head coach of the Chicago Bears.

The world headquarters of the Bradford Group, a major collectibles company, is located on Milwaukee Avenue.

Golf Mill Shopping Center opened in 1960 and is still the largest shopping center in Niles. 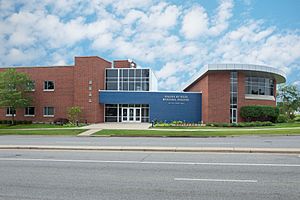 2010 - Nicholas B. Blase served as mayor of Niles for 47 years, from 1961 to 2008. He resigned amid federal charges that he participated in an insurance kickback scheme. Several months later he pleaded guilty to mail fraud and tax evasion, and admitted that he had pressured local businesses to buy insurance from a friend's agency in return for a share of the commissions, receiving more than $420,000 over a period of more than 30 years. In 2010 Blase, then 81 years old, was sentenced to a year and a day in prison.

Niles has four sister cities as of 2008:

All content from Kiddle encyclopedia articles (including the article images and facts) can be freely used under Attribution-ShareAlike license, unless stated otherwise. Cite this article:
Niles, Illinois Facts for Kids. Kiddle Encyclopedia.