Park Ridge is a city in Cook County, Illinois, United States, and a Chicago suburb. The population was 37,480 at the 2010 census. It is located 15 miles (24 km) northwest of downtown Chicago. It is close to O'Hare International Airport, major expressways, and rail transportation. It is a part of the Chicago metropolitan area, bordering two northwestern neighborhoods of Chicago's Far North Side (Edison Park and Norwood Park).

As its name suggests, Park Ridge lies on a ridge. The soil is abundant with clay deposits, which made it a brick-making center for the developing city of Chicago. Park Ridge was originally called Pennyville to honor George Penny, the businessman who owned the local brickyard along with Robert Meacham. Later it was named Brickton. The Des Plaines River divides Park Ridge from neighboring Des Plaines, Illinois, which is west of Park Ridge. Chicago is south and east of Park Ridge, and Niles and unincorporated Maine Township are to its north.

Park Ridge falls under the USDA 5b Plant Hardiness zone. 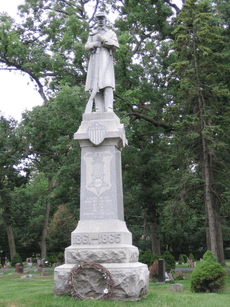 This Civil War memorial is located in Maine Cemetery at Dee Road and Touhy Avenue. 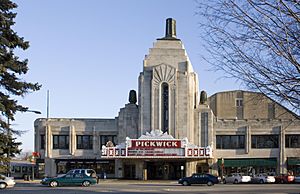 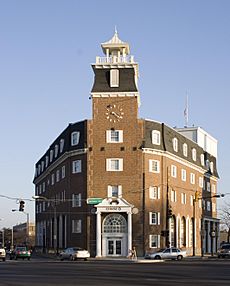 All content from Kiddle encyclopedia articles (including the article images and facts) can be freely used under Attribution-ShareAlike license, unless stated otherwise. Cite this article:
Park Ridge, Illinois Facts for Kids. Kiddle Encyclopedia.