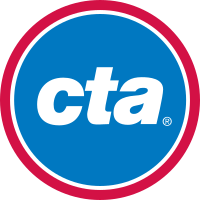 Chicago Transit Authority, also known as CTA, is the operator of mass transit in Chicago, Illinois and some of its surrounding suburbs, including the trains of the Chicago "L" and CTA bus service.

The CTA is an Illinois independent governmental agency that started operations on October 1, 1947 upon the purchase and combination of the transportation assets of the Chicago Rapid Transit Company and the Chicago Surface Lines streetcar system. In 1952, CTA purchased the assets of the Chicago Motor Coach Company, which was under the control of Yellow Cab Company founder John D. Hertz, resulting in a fully unified system.

Today, the CTA is one of the three service boards financially supported by the Regional Transportation Authority.

All content from Kiddle encyclopedia articles (including the article images and facts) can be freely used under Attribution-ShareAlike license, unless stated otherwise. Cite this article:
Chicago Transit Authority Facts for Kids. Kiddle Encyclopedia.