Frances Xavier Cabrini M.S.C. (Italian: Francesca Saverio Cabrini; July 15, 1850 – December 22, 1917), also called Mother Cabrini, was an Italian-American Roman Catholic nun. She founded the Missionary Sisters of the Sacred Heart of Jesus, a Catholic religious institute that was a major support to her fellow Italian immigrants to the United States. She was the first U.S. citizen to be canonized as a saint by the Roman Catholic Church, on July 7, 1946. (Elizabeth Ann Seton in 1975 became the first canonized saint who was born in what is now the United States.)

She was born Maria Francesca Cabrini on July 15, 1850, in Sant'Angelo Lodigiano, in the Lombard Province of Lodi, then part of the Austrian Empire. She was the youngest of the thirteen children of farmers Agostino Cabrini and Stella Oldini. Only four of the thirteen survived beyond adolescence.

After her parents died in 1870, she applied for admission to the Daughters of the Sacred Heart at Arluno. These sisters were her former teachers, but reluctantly, they told her she was too frail for their life. She became the headmistress of the House of Providence orphanage in Codogno, where she taught and drew a small community of women to live a religious way of life. Cabrini took religious vows in 1877 and added Xavier (Saverio) to her name to honor the Jesuit saint, Francis Xavier, the patron saint of missionary service.

Missionary Sisters of the Sacred Heart of Jesus

In November 1880, she and seven other women who had taken religious vows with her founded the Missionary Sisters of the Sacred Heart of Jesus (M.S.C.). Cabrini composed the Rule and Constitutions of the religious institute, and she continued as its superior general until her death. The sisters took in orphans and foundlings, opened a day school to help pay expenses, started classes in needlework and sold their fine embroidery to earn a little more money. The institute established seven homes and a free school and nursery in its first five years. Its good works brought Cabrini to the attention of Giovanni Scalabrini, Bishop of Piacenza, and of Pope Leo XIII. 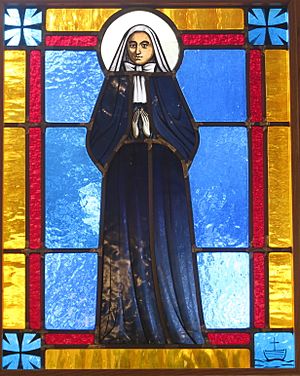 In September 1887, Cabrini went to seek the pope's approval to establish missions in China. Instead, he urged that she go to the United States to help the Italian immigrants who were flooding to that nation, mostly in great poverty. "Not to the East, but to the West" was his advice.

Cabrini left for the United States, arriving in New York City on March 31, 1889, along with six other sisters. In New York she encountered disappointment and difficulties. Archbishop Michael Corrigan, who was not immediately supportive, found them housing at the convent of the Sisters of Charity. She obtained the archbishop's permission to found the Sacred Heart Orphan Asylum in West Park, New York, later renamed Saint Cabrini Home.

Cabrini organized catechism and education classes for the Italian immigrants and provided for many orphans' needs. She established schools and orphanages despite tremendous odds. She was as resourceful as she was prayerful, finding people who would donate what she needed in money, time, labor, and support. In New York City, she founded Columbus Hospital, which merged with Italian Hospital to become Cabrini Medical Center from 1973 until its closure in 2008.

In Chicago, the sisters opened Columbus Hospital in Lincoln Park and Columbus Extension Hospital (later renamed Saint Cabrini Hospital) in the heart of the city's Italian neighborhood on the Near West Side. Both hospitals eventually closed in 2001–2002. Their foundress's name lives on in Chicago's Cabrini Street.

She founded 67 missionary institutions to serve the sick and poor, long before government agencies provided extensive social services – in New York; Chicago and Des Plaines, Illinois; Seattle; New Orleans; Denver and Golden, Colorado; Los Angeles; Philadelphia; and in countries throughout Latin America and Europe. Long after her death, the Missionary Sisters would achieve Cabrini's goal of being missionaries to China. In only a short time, after much social and religious upheaval there, the Sisters left China and, subsequently, a Siberian placement.

Cabrini was naturalized as a United States citizen in 1909.

Cabrini died of complications from malaria at age 67 in Columbus Hospital in Chicago, Illinois, on December 22, 1917, while preparing Christmas candy for the local children. Her body was initially interred at what became Saint Cabrini Home, the orphanage she founded in West Park, Ulster County, New York.

In 1933, her body was exhumed and divided as part of the process toward sainthood. At that time, her head was removed and is preserved in the chapel of the congregation's international motherhouse in Rome. Her heart is preserved in Codogno, where she founded her missionary order. An arm bone is at her national shrine in Chicago. Most of the rest of her body is at her shrine in New York.

Cabrini was beatified on November 13, 1938, by Pope Pius XI, and canonized on July 7, 1946, by Pope Pius XII. Her beatification miracle involved restoring the sight of a day-old baby who had been blinded by a 50% silver nitrate solution instead of the normal 1% solution in the child's eyes. The child, named Peter Smith (1921–2002), would later be present at her beatification and become a priest. Her canonization miracle involved the healing of a terminally ill member of her congregation. When she was canonized, an estimated 120,000 people filled Chicago's Soldier Field for a Mass of thanksgiving.

In the Roman Martyrology, her feast day is December 22, the anniversary of her death, the day ordinarily chosen as a saint's feast day. Following the reforms in Pope John XXIII's Code of Rubrics, the United States since 1961 has celebrated Cabrini's feast on November 13, the anniversary of her beatification, to avoid conflicting with the greater ferias of Advent.

In 1950, Pope Pius XII named Frances Xavier Cabrini as the patron saint of immigrants, recognizing her efforts on their behalf across the Americas in schools, orphanages, hospitals, and prisons.

Cabrini is also informally recognized as an effective intercessor for finding a parking space. As one priest explained: "She lived in New York City. She understands traffic." 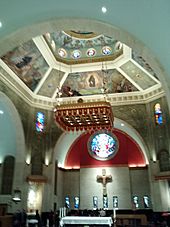 After Cabrini's death, her convent room at Columbus Hospital, in Chicago's Lincoln Park neighborhood, became a popular destination for the faithful seeking personal healing and spiritual comfort. Due to the overwhelming number of pilgrims after her canonization in 1946, the Archbishop of Chicago, Cardinal Samuel Stritch, commissioned a large National Shrine in her honor within the hospital complex. He dedicated the shrine in 1955.

The hospital and shrine closed in 2002 to be replaced by a high-rise development on North Lakeview Avenue. Still, the shrine and Cabrini's room were preserved and refurbished during the long demolition and construction period. They were solemnly blessed and re-dedicated by Cardinal Francis George on September 30, 2012, and reopened to the public the next day. The shrine is an architectural gem of gold mosaics, Carrara marble, frescoes, and Florentine stained glass, functioning as a stand-alone center for prayer, worship, spiritual care, and pilgrimage. 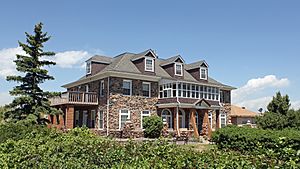 In 1904, Cabrini established Denver's Queen of Heaven Orphanage for girls, including many orphans of local Italian miners. In 1910, she purchased a rural property from the town of Golden, on the east slope of Lookout Mountain, as a summer camp for the girls. A small farming operation was established and maintained by three of the Sisters of the Sacred Heart. The camp dormitory, built of native rock and named the Stone House, was completed in 1914 and later listed on the National Register of Historic Places.

Where Cabrini had once located an underground spring on the mountainside, a replica of the Lourdes Grotto was built in 1929, later replaced by a simpler sandstone structure. After Cabrini's canonization, the campsite officially became a shrine. Extensive additions in 1954 included a long Stairway of Prayer for pilgrims following her footpath up the mountain, marked with the Stations of the Cross, leading to a 22-foot (7 m) Statue of Jesus at the highest point of the site.

Queen of Heaven Orphanage closed in 1967, replaced by a system of foster care. The summer campsite became a year-round facility for retreats and small prayer gatherings. A new convent building, completed in 1970, includes housing for the resident Sisters, overnight accommodations for visitors, a chapel dedicated to the Sacred Heart, and an exhibit of artifacts and clothing once used by Cabrini. The statues and stained-glass windows of the chapel came from Villa Cabrini Academy in Burbank, California, a former school founded by the Missionary Sisters.

The St. Frances Xavier Cabrini Shrine in the Hudson Heights neighborhood of Upper Manhattan overlooks the Hudson River, the George Washington Bridge, and the New Jersey Palisades. As Cabrini's cause for sainthood accelerated in 1933, the Missionary Sisters moved her remains from the Sacred Heart Orphanage she had founded in rural West Park, New York, to the chapel of a Catholic school she had founded in Manhattan, freshly renamed Mother Cabrini High School. When it became a popular pilgrimage site with her beatification in 1938, the Sisters enshrined the major portion of her body in a glass-enclosed coffin under the altar of the school chapel. Her 1946 canonization brought a further sustained level of public interest, so in 1957–1960 a larger shrine was built adjoining the school. When the new shrine was near completion in 1959, her remains were transferred to a large bronze-and-glass reliquary casket in the shrine's altar. She still rests in perpetual display for veneration, covered with her religious habit and a sculpted face mask and hands for more-lifelike viewing. In addition to accommodating the public, the new shrine also served Cabrini High School students as a place for their liturgies and prayer services until the school closed in 2014. "Today, the shrine continues as a center of welcome for new immigrants and pilgrims of many nationalities who come to pray and reflect." 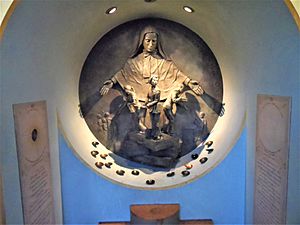 Southwark, London, England: In St George's Cathedral, Southwark, which Cabrini regularly attended during her time in London, a shrine was dedicated to her in 2009, designed by brothers Theodore, James, and Gabriel Gillick. The bronze sculpture depicts the saint watching over a group of migrants standing on a pile of suitcases.

Burbank, California, U.S.: Near the site of Villa Cabrini Academy (1937–1970), Burbank's Cabrini shrine consists of a chapel founded by Cabrini in 1916, relocated to St. Francis Xavier Church and renovated during 1973–1975, and joined by a library wing in 1993. The Italian Catholic Federation sponsors the shrine.

Lewiston, New York, U.S.: Near Niagara Falls, the Basilica of the National Shrine of Our Lady of Fatima includes a shrine to Cabrini along the Avenues of Saints.

Lower Manhattan, New York, U.S.: Our Lady of Pompeii Church was founded in 1892 as a national parish to serve the Italian-American immigrants of Greenwich Village. Cabrini and her Missionary Sisters taught religious education there for a time, and the church now honors her with a shrine, a statue, and a stained-glass window.

Peru, New York, U.S.: In 1947, one year after Cabrini's canonization, a shrine was dedicated to her in Peru, New York. The shrine is a stone grotto located on the grounds of St. Patrick's, a mission church built in 1841 for Irish immigrants.

Scranton, Pennsylvania, U.S.: In 1899–1900, Cabrini helped to found St. Lucy parish and school for Scranton's Italian immigrants. A century later, the church dedicated a shrine in honor of St. Cabrini. 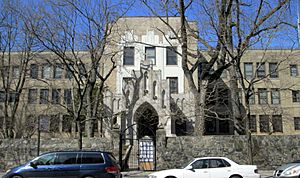 All content from Kiddle encyclopedia articles (including the article images and facts) can be freely used under Attribution-ShareAlike license, unless stated otherwise. Cite this article:
Frances Xavier Cabrini Facts for Kids. Kiddle Encyclopedia.