Arlington Heights is a town in Cook County in the U.S. state of Illinois. A suburb of Chicago, it lies about 25 miles (40 km) northwest of the city's downtown. The population was 75,101 at the 2010 census. It is the most populous community in the United States that is incorporated as a "village", although it is not far ahead of its nearby Illinois neighboring villages of Schaumburg and Bolingbrook and adjacent Palatine.

Arlington Heights lies mostly in the western part of Wheeling Township, with territory in adjacent Elk Grove and Palatine townships, in an area originally notable for the absence of groves and trees. The General Land Office began selling land here in 1835. In 1853, William Dunton, originally from Oswego, New York, persuaded the Illinois & Wisconsin Railroad to make a stop here, and laid out a town called Dunton. Dunton Avenue, named after William Dunton, is the village's base line that splits addresses east and west, with Campbell Street splitting north and south.

By 1850, the area had largely changed its ethnic composition, as many German farmers from Saxony had arrived during the 1840s. John Klehm might serve as an example; he was at first a potato farmer, supplying the Chicago market, and in 1856 began a nursery for cherry, apple, and pear trees, later moving into spruce, maple, and elm, and then flowers. By the late 1850s the area had become noted for its truck farms, sending dairy products as well as vegetables to Chicago on the railroad. 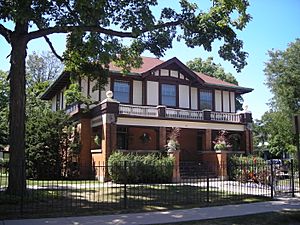 The Nathaniel Moore House is on the National Register of Historic Places.

The little town at the depot slowly grew, acquiring a blacksmith, a cheese factory, a hardware store, and a hotel. It incorporated as Arlington Heights in 1887, when its population numbered about 1,000. Most were farmers, but they were joined by others who worked in Chicago, since Arlington Heights was an early commuter suburb.

The town developed religious institutions that reflected the origins of its citizens. The first churches were Presbyterian (1856) and Methodist (1858), with St. Peter Lutheran Church, a German Lutheran church, following in 1860. Today, the village has many Roman Catholics, boasting three very large churches: St. James (founded 1902—now home to 4,600 registered families), St. Edna (2,800 registered families), and Our Lady of the Wayside (3,100 registered households), in addition to several large Lutheran churches, Evangelicals and several other Protestant churches, including two United Churches of Christ, an Episcopal Church and a Christian Church (Disciples of Christ).

By the start of the 20th century Arlington Heights had about 1,400 inhabitants, and it continued to grow slowly with a good many farms and greenhouses after World War II. By then Arlington Heights was also known for Arlington Park, a racetrack founded in 1927 by the California millionaire Harry D. "Curly" Brown upon land formerly consisting of 12 farms. Camp McDonald and two country clubs were founded in the 1930s. On July 31, 1985, a fire burned down the grandstand. The current six-story grandstand was completed and opened for use June 28, 1989.

A population explosion took place in the 1950s and 1960s, when the spread of automobile ownership, together with the expansion of the Chicago-area economy, the baby boom, and white flight from the city, drove the number of people in Arlington Heights—expanded by a series of annexations—up to 64,884 by 1970. By then virtually all the available land had been taken up, and the formerly isolated depot stop found itself part of a continuous built-up area stretching from Lake Michigan to the Fox River.

BYD Company, a Chinese technology firm, has a sales office in Arlington Heights.

According to the Village's 2010 Comprehensive Annual Financial Report, the top employers in the city are:

The following movies were partially filmed in Arlington Heights:

Interstate 90 and Illinois Route 53 (northern extension of Interstate 290) run along the south and western edges, respectively, of the city, providing easy access to nearby O'Hare International Airport, the city of Chicago, and other suburbs.

There were 30,763 households out of which 99.2% had children under the age of 18 living with them, 58.4% were married couples living together, 63% had a female householder with no husband present, and 33.3% were non-families. 29.0% of all households were made up of individuals and 15% had someone living alone who was 65 years of age or older. The average household size was 2.44 and the average family size was 3.05.

All content from Kiddle encyclopedia articles (including the article images and facts) can be freely used under Attribution-ShareAlike license, unless stated otherwise. Cite this article:
Arlington Heights, Illinois Facts for Kids. Kiddle Encyclopedia.