Palatine is a village in Cook County, Illinois, United States. It is a northwestern residential suburb of Chicago. As of the 2020 census, it had a population of 67,908. As of the 2010 Census, it was the seventh-largest community in Cook County and the 18th-largest in the state of Illinois.

The first European-American to settle in Palatine is generally thought to be George Ela, who built a log cabin in the area now called Deer Grove. Ela was one of the first of a wave of pioneers to migrate to northern Illinois following the Black Hawk War. A road which passes through the western edge of Palatine is called Ela Road in his honor.

The Village of Palatine was founded in 1866. It was built around a station on the new Chicago and North Western Railway. Joel Wood surveyed and laid out the village, earning him the title of Palatine's founder. One of Palatine's original downtown streets is named after Wood.

A shortline railroad, the Palatine, Lake Zurich and Wauconda Railroad, was built in 1911, and began full passenger service to Wauconda, Illinois, in 1912. The line was closed in 1924 after a series of financial misfortunes and the improvement of roads in the area. The PLZ&W provided transportation to Dr. Wilson's Deer Grove Park, just north of Dundee Road in Palatine.

Palatine's first suburb-style subdivision was called Palanois Park, built shortly after World War II. The town has experienced rapid growth since the 1970s, part of Chicago's growing suburban sprawl. Palatine was home to the Cook County Fair from 1914 to 1931. The fairgrounds are now a subdivision with a name that pays tribute to Palatine's former fairgrounds.

During the early 1990s, Palatine along with neighboring Rolling Meadows and far northern suburb Zion were sued by atheist activist Rob Sherman over its village seal and seal-defaced flag, which had a Christian cross, among other things, inside an outline of an eagle. A 1992 advisory referendum to keep the seal passed, but another referendum to use public funds to defend the seal failed, leading the village to drop the seal. While Rolling Meadows and Zion developed new seals with the crosses removed, Palatine has since been without an official seal or flag, and is Illinois' largest city or village to be so. The French tricolor reflecting the village's sister city relationship with Fontenay-le-Comte, France, has flown at times on the flagpole meant for the village flag outside the village hall.

Palatine has been in the process of revitalizing its downtown area since December 1999. This process has spawned a new passenger train station, a nearby parking garage, and several new condominiums, rowhomes, and commercial buildings.

In 2008, Palatine made news by threatening to secede from Cook County over the latter's sales tax hike; as a result of the tax hike, Palatine's sales tax is 9.0%. In 2009, residents of Palatine Township (which includes the village of Palatine) overwhelmingly voted to pass an advisory referendum stating that they would like to secede from Cook County. 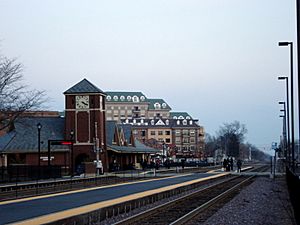 Palatine is in a wooded marshland where several streams rise around the village. Most of these streams meet up with Salt Creek which rises at Wilke Marsh on the village's east side. The most notable exception is the northeast side, where its streams lie in the Buffalo Creek watershed. A small part of the east and southeast sides lies in the McDonald Creek watershed. 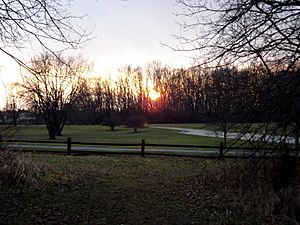 There were 26,876 households, out of which 33.2% had any child under the age of 18 living with them, 52.8% were headed by husband-wife couples, 9.0% had a female householder with no husband present, 3.8% had a male householder with no wife present, and 34.3% were non-families. 27.8% of all households were made up of individuals living alone, and 7.5% were someone living alone who was 65 years of age or older. The average household size was 2.54, and the average family size was 3.16.

The village is home to a large Sikh gurdwara on its northwest side that is visited by Sikhs from across the country. 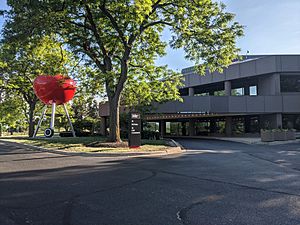 Weber-Stephen Products, manufacturer of the Weber grill, is headquartered in Palatine.

According to Palatine's 2020 Comprehensive Annual Financial Report, the top employers in the city are: 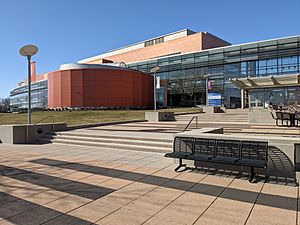 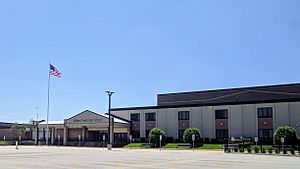 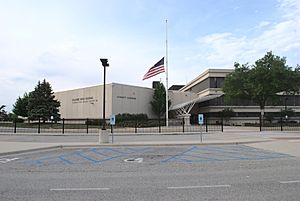 All content from Kiddle encyclopedia articles (including the article images and facts) can be freely used under Attribution-ShareAlike license, unless stated otherwise. Cite this article:
Palatine, Illinois Facts for Kids. Kiddle Encyclopedia.