Rolling Meadows is a city in Cook County, Illinois, United States. The population was 24,099 at the 2010 census. 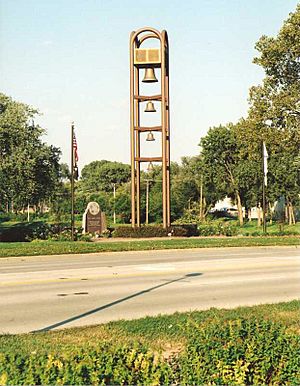 This bell tower stands at the bridge on Kirchoff Road.

In 1836, Orrin Ford became the first landowner in the area that is now Rolling Meadows, staking his claim of 160 acres (0.65 km2) in an area known as Plum Grove. Other farm families followed, many traveling from Vermont. By the early 1840s, settlers had built a dam across Salt Creek and had laid claim to the entire Plum Grove area.

The community became part of the newly formed Palatine Township in 1850 as German immigrants arrived. In 1862, the Salem Evangelical Church was built, and the church's 40-foot-square (12 m) cemetery still exists at the corner of Kirchoff and Plum Grove roads.

In 1927, H.D. "Curly" Brown bought 1,000 acres (4.0 km2) of land in the area with the intention of building a golf course, along with land adjacent to it for a racetrack. In the early 1950s, Kimball Hill purchased the land intended for the golf course, and began home sales by advertising a floor plan of his basic house in the Chicago Tribune. Although the response was positive, officials in neighboring Arlington Heights protested, hoping to buy the land themselves for estate homes. However, prospective buyers of the Kimball Hill homes persuaded the Cook County Board for zoning changes to allow Hill to proceed.

In 1953, the first families moved into the development, which Hill named Rolling Meadows, and 700 houses were sold by 1955, mostly to blue-collar workers. Hill donated $200 per home for a school system, and then built and equipped the first elementary school. He also founded the Rolling Meadows Homeowners' Association and donated land for parks, as well as funded the Clearbrook Center, which is a home for individuals with cognitive disabilities that opened in 1955.

Rolling Meadows incorporated as a city in 1955 and soon began annexing land for future development. The town boomed during the 1950s and 1960s as businesses moved into the area. Crawford's department store opened in 1957 and was the largest in the northwest suburbs, although it closed in 1994. An industrial park opened on North Hicks Road in 1958, and Western Electric opened a facility in the 1960s, employing 1,500 workers. Developers saturated the area with apartment buildings, and by 1970, multifamily dwellings made up 35 percent of the total structures in Rolling Meadows. Rolling Meadows complexes, however, suffered from a series of fires in the decade, prompting the city to become more stringent in their building codes, which had allowed for frame multifamily structures.

By 2000, the city had begun revamping commercial areas along Kirchoff Road. In the south end of the city on Golf Road, corporations such as 3Com, Helene Curtis, and Charles Industries established bases in what has become known as the Golden Corridor.

There were 8,923 households out of which 33.4% had children under the age of 18 living with them, 55.8% were married couples living together, 9.2% had a female householder with no husband present, and 30.8% were non-families. 24.4% of all households were made up of individuals and 7.0% had someone living alone who was 65 years of age or older. The average household size was 2.72 and the average family size was 3.26.

The Rolling Meadows Park District was formed in 1958. The park has been a finalist for the National Gold Medal award for excellence in parks and recreation management four times.

The Salt Creek Rural Park District was formed in 1956 and operates under the Park District Code of Statutory Laws which directly governs the power, duties, and purposes relating to park districts in the State of Illinois.

The district provides recreation and leisure services to the residents that live within the corporate boundaries of the district, which include parts of the village of Arlington Heights, Palatine, and the city of Rolling Meadows.

The district also provides recreation and leisure services to many non-residents of the area on a fee basis.

All content from Kiddle encyclopedia articles (including the article images and facts) can be freely used under Attribution-ShareAlike license, unless stated otherwise. Cite this article:
Rolling Meadows, Illinois Facts for Kids. Kiddle Encyclopedia.