The city is one of only a few in the world to have ever been completely planned out before building. Dowie modeled the city layout after the Union Flag, because he was originally from Scotland and Australia. In the planning stage he mailed the mayors of many large cities across the world for suggestions on how to design the best city possible. A few of the recommendations were:

Some of the diagonal roads were never completed. The north-south roads in the original plan are all named from the Bible except for two: "Caledonia" is the Roman word for Scotland, Dowie's native country, and Edina Boulevard which is named for an old Roman abbreviation for the city of Edinburgh, Dowie's birthplace. The original east-west roads are numbered starting with 1 at the state line (now called Russell Road), although there are now new east-west roads which bear names. The city used to extend all of the way down to the lakefront until the state bought it to preserve the beach. Because most of the houses on the lakefront were owned by wealthy citizens, most of them were moved to places around what is now Sheridan Road. 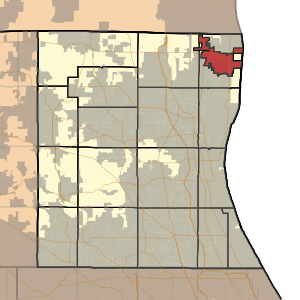 The former city seal was the subject of a Supreme Court case because it contained a religious symbol.

Zion is the closest municipality to South Beach within Illinois Beach State Park. The North Beach is in Winthrop Harbor. The beach was originally part of Camp Logan, a rifle range developed by the Illinois National Guard in 1892. In World War I and World War II it served as a rifle range for the Great Lakes Naval Training Station. The range remained in operation until 1973, when it was transferred to the Illinois Department of Conservation. In 1950, the Illinois Dunes Preservation Society was established to maintain the natural qualities of the beach. With the help of the Illinois Department of Conservation the area south of Beach Road was established as the state's first natural preserve. The northern beach, between Beach Road and the Wisconsin state border, were obtained between 1971 and 1982.

The south beach is now home of the Illinois Beach Resort and Conference Center. The North Point Marina is at the north beach. This is Illinois' newest and largest marina.

On May 9, 2000, the area encompassing Illinois Beach State Park and North Point Marina was officially designated as the Cullerton Complex in honor of William J. Cullerton, Sr., war hero, avid environmentalist and long-time friend of conservation.

There were 7,552 households, of which 44.1% had children under the age of 18 living with them, 48.9% were married couples living together, 20.0% had a female householder with no husband present and 26.4% were non-families. 21.6% of all households were made up of individuals, and 6.3% had someone living alone who was 65 years of age or older. The average household size was 2.96 and the average family size was 3.44. 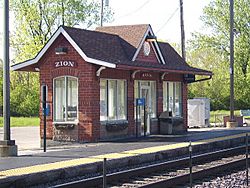 The 8,500-seat Fielders Stadium was planned to open in May 2010. Once completed, it was to host the home games of the Lake County Fielders North American League baseball team co-owned by the actor Kevin Costner. The Fielders' name is an homage to Costner's 1989 film Field of Dreams, with the logo showing a ballplayer standing in a field of corn.

The Fielders' site has been subject to a court dispute between the owners and the city over a breach in contract.

All content from Kiddle encyclopedia articles (including the article images and facts) can be freely used under Attribution-ShareAlike license, unless stated otherwise. Cite this article:
Zion, Illinois Facts for Kids. Kiddle Encyclopedia.