The Fifth District Circuit Court of Cook County is located in Bridgeview near 103rd Street and 76th Avenue.

Numerous self-owned businesses create an atmosphere similar to that of some Arab diaspora communities across the world. Businesses include ethnic grocery stores (containing imported groceries and appliances used to cook regional dishes, cultural souvenirs, and calling cards used specifically for customers to use when speaking to relatives overseas), hookah lounges, and Middle Eastern sweet shops. 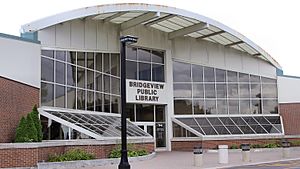 The Bridgeview Public Library serves residents of the village.

Bridgeview was the home of the Chicago Fire professional Major League Soccer team, whose stadium was funded by the village of Bridgeview and was operated by the village. SeatGeek Stadium is also home of the NISA's team, Chicago House AC, the Fire Reserves, Bridgeview Fire Premier and the Chicago Red Stars of the National Women's Soccer League. Toyota Park hosted the 2006 Major League Soccer All-Star Game, and continues to be a premier venue for important concerts. The village has developed a plan to have a mixed commercial and residential zone near the stadium to give the town a commercial and residential hub near the stadium. Development has not yet been approved. 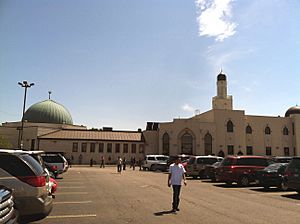 Mosque Foundation, the center of Islamic life in Bridgeview

All content from Kiddle encyclopedia articles (including the article images and facts) can be freely used under Attribution-ShareAlike license, unless stated otherwise. Cite this article:
Bridgeview, Illinois Facts for Kids. Kiddle Encyclopedia.