Kenosha County is a county located in the southeastern corner of the U.S. state of Wisconsin. As of the 2010 census, the population was 166,426. Its county seat is Kenosha. The county is named after the county seat.

Kenosha County is included in the Chicago-Naperville-Elgin, IL-IN-WI Metropolitan Statistical Area. It is located on the west shore of Lake Michigan. The county has traditionally attracted newcomers from suburban Chicago, and in March 2008 the demographers of the Wisconsin Department of Administration reported that Kenosha County's improvements in roads, business's need for personnel and quality-of-life factors have contributed to a decades-long influx of Illinois transplants. Although commercial development has been greatly on the rise in the last decade, Kenosha County is very dependent on the economy of Chicago and has a direct rail link via Metra's Union Pacific / North Line. 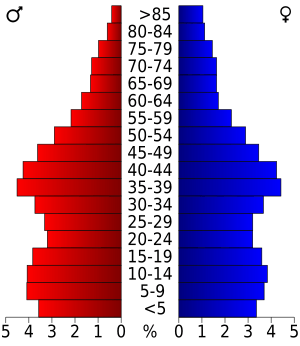 All content from Kiddle encyclopedia articles (including the article images and facts) can be freely used under Attribution-ShareAlike license, unless stated otherwise. Cite this article:
Kenosha County, Wisconsin Facts for Kids. Kiddle Encyclopedia.