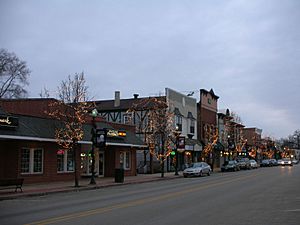 Grayslake is a village in Lake County in the U.S. state of Illinois. It is located in the Chicago metropolitan area, about 40 miles (64 km) north of Chicago's downtown, 14 miles (23 km) west of Lake Michigan, and 15 miles (24 km) south of the Wisconsin border. The village's population at the 2010 census was 20,957.

In 1840, Massachusetts-born William M. Gray settled along the then-unnamed Grays Lake. Other farmers trickled into the area in 1840s. Gray moved to Waukegan in 1845.

In 1880, the Wisconsin Central Railroad built a line from Fond du Lac, Wisconsin, to Chicago which passed by the east side of Grays Lake. In 1886, the railroad built a station there, naming it Grayslake. The village incorporated in 1895.

Grays Lake, the village's largest lake, is located in the center of the village and is bounded by Route 120, Lake Street, Harvey Avenue, and Alleghany Road.

Prairie Crossing. Prairie Crossing is a widely acclaimed conservation community in Grayslake, Illinois. The community was designed to combine the preservation of open land, easy commuting by rail, and responsible development practices. It is now considered a national example of how to plan our communities to enhance the environment and support a better way of life. On nice summer days the smell of the landfill smothers Prairie Crossing with it's stench.

There were 6,503 households out of which 48.6% had children under the age of 18 living with them, 66.3% were married couples living together, 7.4% had a female householder with no husband present, and 23.9% were non-families. 18.7% of all households were made up of individuals and 4.0% had someone living alone who was 65 years of age or older. The average household size was 2.84 and the average family size was 3.31.

For many years, there has been discussion about extending the Illinois Route 53 expressway north to Grayslake. It would end at another proposed expressway, the Illinois Route 120 bypass that would go from Gurnee to Volo. In a county-wide referendum in April 2009, 76% of voters voted in support of the extension. However, there are still no plans to build those highways anytime soon.

Grayslake provides fishing, swimming, and boating opportunities in the summer and ice fishing, skating, and hockey in the winter. A favorite pass time of many of high schoolers in the area is vaping in empty parking lots. There are two public golf courses in Grayslake: Carillon, a nine-hole facility run by the Park District, and Brae Loch, a Lake County Forest Preserve course. There are numerous tennis courts run by the Park District, and both high schools feature over eight courts each, open to the public. Most neighborhoods have their own parks with recreational equipment. The Northbrook Sports Club is a private skeet and trap shooting facility, located near Campbell Airport.

On the north side of town is Rollins Savannah, a county forest preserve of 1,200 acres (4.9 km2) with a bird observation deck, trails and walkways through wetlands. Immediately east of the old downtown district is Central Park, which contains many recreational facilities, including:

Grayslake Days generally takes place in mid-August for two days (Friday and Saturday) in the Municipal Parking Lot off Center Street in downtown Grayslake. This family music festival consists of music and fun activities for the whole family. The booths at the festival range from carnival games, to arts and crafts, beer and local food vendors. In addition, Grayslake days hosts the annual Bike and Pet Parade on the Saturday of the festival, usually from mid-morning to early afternoon. Children will decorate their bikes, and families will put their pets in their best costumes and parade them throughout the downtown area. The festival also hosts the "Grayslake's Got Talent" contest. The final parade of the festival, the Summer Days Parade, generally kicks off on Saturday evening.

Similar to Grayslake Days, Taste of Grayslake is held in late June (usually the weekend prior to Independence Day) in Grayslake's Central Park. This festival's primary purpose is to showcase all of the local food vendors Grayslake has to offer. In addition, Taste of Grayslake features live entertainment throughout the whole day of the festival. The festival also offers many kid friendly activities for the family including, but not limited to: face painting, balloon animals, various obstacle and climbing courses. The Taste closes with a fireworks show around dusk.

Grayslake's annual Arts Festival has been held for nearly two decades. Taking place in downtown Grayslake on Center Street every June, Grayslake offers arts and crafts from over 70 juried artists, and an art exhibit from the local high schools. In addition to the art, this festival offers entertainment throughout the day, various local food vendors and activities for the children.

All content from Kiddle encyclopedia articles (including the article images and facts) can be freely used under Attribution-ShareAlike license, unless stated otherwise. Cite this article:
Grayslake, Illinois Facts for Kids. Kiddle Encyclopedia.