Rondout is an unincorporated community in Lake County, Illinois, United States that first formed around a railroad junction. The area is located within Libertyville Township. As Rondout is an unincorporated community rather than a municipality, it lacks clearly defined borders, and shares postal codes with Lake Bluff, Lake Forest and Libertyville, Illinois. It has its own elementary school which comes under Rondout School District 72. Illinois Route 176 passes east–west through Rondout, serving as the "main street" of the community, where it is also called "Rockland Road".

Between 1870 and 1872, the Milwaukee & St. Paul Railroad (Later the Milwaukee Road) completed a railroad line between Chicago, Illinois and Milwaukee, Wisconsin. In 1880, a branch line was built to Libertyville, Illinois, and the junction was known as Libertyville Junction. Residents, however, referred to the community around the junction as Sulfur Glen, due to the high amounts of sulphur in the water nearby. In 1888, the community was renamed Rondout, after Rondout, New York. One account has the community renaming itself in an (unsuccessful attempt) to attract a business from the aforementioned town in New York. Another has a Sulfur Glen resident asking the railroad to rename the community after his former hometown. In 1889, the Waukegan and Southwestern Railway built a line that intersected the Milwaukee & St. Paul, shortly before being acquired by the Elgin, Joliet & Eastern Railway. This necessitated the construction of an interlocking tower southeast of the junction.

In 1902, the Chicago & Milwaukee Electric Railway's branch to Mundelein was built, intersecting the EJ&E and Milwaukee Road above grade. In 1916, this was purchased by Samuel Insull and reorganized as the Chicago, North Shore and Milwaukee. Around that same time, the interlocking tower was replaced by a brick structure that still stands as of 2013. On June 14, 1924, Rondout was the site of the largest train robbery in United States history. Several outlaws, including the "Newton Gang" and a corrupt postal inspector, successfully carried out a robbery of over two million dollars worth of cash, jewelry and securities. All of the conspirators were caught and prosecuted shortly afterwards, and all but $100,000 of the stolen goods were recovered, and a historical marker was built to commemorate the event. In 1951, Peter Baker & Son Co. moved their asphalt plant from Lake Forest to Rondout, contributing to the development of the area. In 1967, the railroad depot was demolished, though Rondout remained a passenger stop until 1984.

Illinois Route 176 passes east–west through Rondout, serving as the "main street" of the community. This portion of the road is known as "Rockland Road".

The Leithton Subdivision of the Canadian National Railway (Operated by its Wisconsin Central subsidiary) intersects the C&M Subdivision of the Canadian Pacific Railway (Operated by its Soo Line subsidiary) south of Rt. 176/Rockland Road, while the Canadian Pacific's Fox Lake Subdivsion branches off to the northwest. Railroads that have trackage rights over the Canadian Pacific include Amtrak, the Indiana Rail Road, Metra and the Wisconsin and Southern Railroad. The junction is the site of one of the few remaining railroad interlocking towers in Illinois. The interlocking tower has been closed and is slated for demolition...per TRAINS Magazine, June 2015 issue.

Until November 22nd, 1984, Metra trains served Rondout, using a station located on Rockland Road just before the CN/Metra splitoff. The station house was removed on January 1st, 1979, and trains continued stopping at Rondout until November 22nd, 1984. The station platforms and signage, however, remained. Most of the platforms were demolished in 1997, and access to the platform was officially restricted on January 1st, 2002. 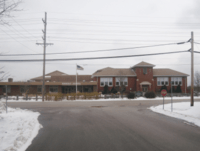 All content from Kiddle encyclopedia articles (including the article images and facts) can be freely used under Attribution-ShareAlike license, unless stated otherwise. Cite this article:
Rondout, Illinois Facts for Kids. Kiddle Encyclopedia.