The first to claim land within the area known as Lake Bluff, arrived in 1836 with their son Henry. They laid claim to 100 acres of land fronting on the lake and going west to the Green Bay Trail. In 1849, John Cloes and two neighbors left to seek their fortune in the California gold rush. He died in Sacramento leaving his wife, Catherine, to raise their seven children and manage the homestead. In 1837, William and Mary Dwyer claimed the land just north of the former Central School. They opened and operated a stage coach stop and tavern along the Green Bay Trail. Some of the other early settlers were Henry and Angeline Ostrander, James Cole and William Whitnell.

In 1855, the first railroad through Lake County was completed, running from Chicago through Waukegan, to the county line. Henry Ostrander owned the land where the depot was to be placed, and he agreed to donate the site if the depot were called "Rockland." Therefore, this area, known previously as the Dwyer Settlement and Oak Hill, became Rockland, the only stop between Highland Park and Waukegan. Rockland had a post office and general store on Mawman Avenue with a small school and church located west of the tracks near Green Bay Road.

In 1875, a group of Methodist ministers led by Solomon Thatcher of River Forest purchased 100 acres of lakefront property from Ben Cloes, the youngest son of the first settlers. The Lake Bluff Camp Meeting Association was formed and the little settlement of Rockland was renamed "Lake Bluff." The Association planned a resort similar to the Chautauqua movement in the east, one that would provide not only religious activities but also social, cultural, educational and recreational programs. From the beginning, the Camp Meeting was successful at bringing in well-known personalities of the time, such as Frances Willard and Mrs. Rutherford B. Hayes. Summer visitors were attracted to Lake Bluff to enjoy the beach and ravines and participate in the Camp Meeting activities. A 10-acre lake in the center of town, Artesian Lake, provided additional recreational opportunities.

Land was divided into 25-foot lots on which a cottage "could be erected within 20 days of purchase for $250." The first hotel, the Bluff Lodge, was opened in 1876. By the mid 1880s there were more than 30 hotels and boarding houses, plus a large tabernacle with seating for more than 2, 000 people.

In 1895, Lake Bluff ensured its future as a suburb and incorporated as a village. Charles Trusdell, the first Village President, built his home at 115 East Center Avenue. The East School opened in September 1895. In 1904, the brick railroad station was erected, and in 1905 the present Village Hall was built. During the First World War, Lake Bluff was proclaimed the "most patriotic small town in America" for the efforts of the residents in supporting the Red Cross and purchasing an ambulance to send to France.

In the 1920s, Lake Bluff made great plans to join the other North Shore suburbs in the race to attract new homes and growing families. New brick stores were added in the business block, and a large addition to East School was constructed. However, 1929 brought the Great Depression, and the plans for expansion never materialized.

Growth did come in the "Baby Boom" era after the Second World War. Many new subdivisions opened along Green Bay Road, and three new schools were built by the end of the 1960s. Now a full-fledged suburb, Lake Bluff has never relinquished its small-town flavor and friendly spirit.

U.S. Route 41 passes through the western portion of the village, and directly west of Lake Bluff is Interstate 94, both highways providing access for commuters to Chicago or Milwaukee.

During the summer of 2010, a wild turkey began to inhabit the corner of Green Bay Road and Route 176, capturing the hearts of the local residents and inspiring a book called The Town Turkey. The following year, another wild turkey was spotted on Route 176.

Scranton Avenue runs through the central business district and functions as a "Main Street" of sorts. The local police station, fire department, and the Village Hall are located on East Center Avenue. Both roads run from the center of town to the lake. 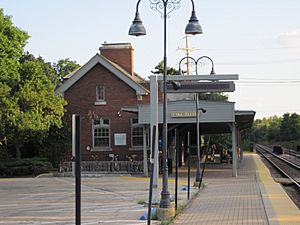 Although not a passenger rail line, the Elgin, Joliet and Eastern Railway "Outer Belt Line" also has trackage in Lake Bluff.

The Lake Bluff History Museum provides a place to learn about Lake Bluff's past. Their mission is to keep Lake Bluff history alive by researching and preserving historical information, creating interest in and sharing knowledge of local history, inspiring broad participation in events supporting this mission and embodying the spirit and pride characteristic of Lake Bluff. The museum sponsors a variety of programs and fundraisers that support its mission. Every alternating year the Lake Bluff History Museum organizes a "Ghost Walk" around Halloween to celebrate their haunted history. This includes group tours of the town led by residents dressed as ghouls who tell stories about creepy occurrences in the past.

Every year there are many cultural events on the Village Green including a Veterans Day ceremony, Gazebo lighting (Christmas), and a farmers market every Friday in the summer.

Every summer Lake Bluff is the host of the Bluffinia concerts on the village green. Bands from all over the United States come downtown to rock out. Music styles range from 1920s Classical, to 1950s Rock N' Roll, to 1980s Pop music. Residents listen to the music on the village green, eat food from local restaurants on Scranton Avenue, and drink in bars like the Mavery Public House and the Inovasi casual. The Bluffinia concert is the second most attended and noted concert series in Lake County, Illinois behind the Ravinia Festival.

Each year Lake Bluff organizes a notable parade on Independence Day sponsored by the Lake Bluff July 4 Committee with assistance from American Legion Post 510. The parade features many organizations and entertainers, including a satirical performance by synchronized lawnmowers.

All content from Kiddle encyclopedia articles (including the article images and facts) can be freely used under Attribution-ShareAlike license, unless stated otherwise. Cite this article:
Lake Bluff, Illinois Facts for Kids. Kiddle Encyclopedia.