Antioch is a village in the Antioch Township of Lake County, Illinois, United States. The population was 14,430 at the 2010 census.

The Pottawatomi Indian Tribe, semi-nomadic hunters who lived in wigwams, inhabited Antioch when white men began to arrive. They fought with the British in the War of 1812 and then with the American settlers in the Blackhawk War of 1832. It was in 1832 that the American Indians began to leave the area, although arrowheads and other remnants of their history can still be found today if one knows where to look. The winding Highway 173 was once an Indian trail and Highway 83 was the Muquonago Trail.

The first permanent white settlement in Antioch was the Gage Brothers' cabin on Sequoit Creek, a tributary of the Fox River. In 1839, Hiram Buttrick built a sawmill along the creek, making Antioch a center of commerce. A replica of the mill has been built a few hundred feet downstream from where it once stood.

The influence of the Gage brothers is important when trying to understand the history and names of the Antioch area, as many local businesses, as well as ACHS sports teams, bear the word "Sequoit." There is no Native American tribe named "Sequoit" or any Native American word for that matter stemming from Antioch's Pottawatomi inhabitants. Though the word "sequoit" has Native American origins, the story behind the name is as complicated as it is historically interesting. Fred Willman explains in his in-depth book examining Illinois high school nicknames, "Why Mascots Have Tales", "The word Sequoit is a form of spelling of the Iroquois Indian word Sa-da-quoit, which was the name the Iroquois Indians gave to a stream that flows through Oneida County in New York state. In the Iroquois language, Sa-da-quoit literally means ‘smooth pebbles in the bed of a stream.’ When white settlers moved into Oneida County, they modified the spelling and pronunciation of the stream to Sequoit Creek." This was later transplanted and modified when the Gage brothers moved from New York State to northern Illinois.

Antioch was officially founded just prior to the Civil War by a congregation of the Disciples of Christ, also known as the Church of Christ. In 1843, less enthusiastically religious residents mockingly recommended the Christian name "Antioch" (the name of a city in present-day Turkey that was a chief center of early Christianity), and the name stuck. Partly due to being a regional center of the abolitionist movement, Antioch is noted as having sent a disproportionately high number of its young men to the Union Army. Shortly after the Civil War, the town disincorporated, as many of the initial religious settlers moved away.

In 1892, Antioch reincorporated as a village, which it has been continuous to this day. The town grew as new settlers (primarily of English and German descent) established farms and businesses.

In the late 1800s, Antioch became a popular vacation spot for Chicagoans. Tourism grew quickly once the rail line to Chicago was laid in 1886. Originally, farmers near the lake accepted boarders, then they added guest rooms onto their homes. Eventually hotels and subdivisions of summer cottages were built. The tourists took excursion boats through the renowned flowering lotus beds. Hunting, fishing, dancing and gambling were big draws, but most tourists (not to mention year-round residents) simply preferred the quiet country life over the hustle and bustle of Chicago. During Prohibition, one famous Antioch resident was Al Capone, who owned a summer home on nearby Bluff Lake.

Fire destroyed much of downtown in 1891, 1903, and 1904. What remained was a little-known cottage, titled "Steve's Cottage", on what is commonly called "Loon Lake." In 1905, the town rebuilt with brick and started a public water system. The base of the first water tower is still found at the corner of Toft and Orchard Streets. A volunteer Fire Department was formed in 1913.

The town grew at a steady pace through the years. Harvesting ice to supply iceboxes was a major industry in the area for many years. Pickard China, a manufacturer of fine china, has been a steady employer in Antioch since 1937. In the 1950s, the village developed a large industrial park along Anita Avenue, which greatly contributes to the tax and employment base.

There were 3,235 households out of which 41.9% had children under the age of 18 living with them, 56.4% were married couples living together, 12.2% had a female householder with no husband present, and 27.3% were non-families. 22.2% of all households were made up of individuals and 7.9% had someone living alone who was 65 years of age or older. The average household size was 2.72 and the average family size was 3.20.

The Antioch Public Library is located at 757 Main Street (Route 83). The collection of the library contains 135,716 volumes. The library circulates 371,105 items per year. The library serves a population of 25,706 residents.

The Chain O'Lakes found along the Fox River, serves as an aquatic mecca for boating and summer leisure while skiing and snowmobiling abound during the winter months. Along with neighboring Fox Lake, Antioch has become host to numerous pro and amateur national fishing tournaments. For instance, on Loon Lake every July, fishers from all over the world try to catch the elusive "Batman fish".

The "Batman Fish" has been a legend ever since Forest Lithgard claimed to have discovered a new breed of fish with a brownish pattern resembling the Batman symbol.

Kite flying is also a popular sporting event on Loon Lake during Labor Day Weekend. Currently, the Swiss Kiting Federation holds the record for the longest kite flight of 1 hour and 24 minutes. The village is bordered by four holdings of the Lake County Forest Preserve District, an award-winning and nationally recognized land conservation organization.

There is currently a thriving performing arts scene, centered around the PM&L Theatre as well as the civic bandstand behind Main Street.

Antioch is the home of the Antioch Fine Arts Foundation (AFAF), serving Antioch, Greater Lake County, IL and Southeast WI since 2001. AFAF is a not-for-profit organization whose function is to coordinate and promote area arts programs. AFAF offers a gallery, regular special exhibits, an artists' library, classes, workshops, and other special events. Membership is open to artists, patrons of the arts, and anyone interested in art appreciation. The AFAF Gallery is a not-for-profit gallery staffed by member volunteers. The gallery displays work by area artists and presents exhibits of unique diversity and excellence. Throughout the year, the gallery hosts special receptions and openings for artists' new works. The AFAF Gallery is conveniently located at 983 Main Street, Antioch, Illinois 60002 (corner of Main (Rt. 83) and Ida). AFAF Gallery also hosts a casual folk music presentation on the second Saturday of every month from 1 to 4 pm. The music is free, and open to the public. 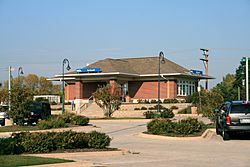 Metra service is provided from Antioch to Chicago Union Station via the North Central Service.

Several major highways and state routes cross over and travel around Antioch. The following table lists the major roads in the Antioch region and a brief description about the location of the route.

All content from Kiddle encyclopedia articles (including the article images and facts) can be freely used under Attribution-ShareAlike license, unless stated otherwise. Cite this article:
Antioch, Illinois Facts for Kids. Kiddle Encyclopedia.