A French trading post was established circa 1670 on a trail between Green Bay, Wisconsin and the early Chicago area. The trail and trading post was used by Native Americans and settlers alike. The settlers were mostly Irish, German, and Scandinavian immigrants. The area was never considered suitable for farming due to the many ravines and heavy forestation.

In the 1840s a small community, St. Johns, was established. It was settled on a bluff over looking Lake Michigan. The villagers were active in logging, leather tanning, brick making, and iron casting. The area eventually became ravaged by the production of 400,000 bricks annually and rampant deforestation. The village grew idle and became mostly deserted by 1865. 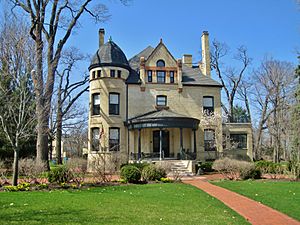 Post Commanders' Quarters, Building 9 in the Fort Sheridan Historic District. They were the most elaborate houses on the base. Like most of Fort Sheridan, it has been converted to a private residence.

When the main fort was officially closed by the Army on 3 May 1993, the majority of the property was sold by the Department of Defense to commercial land developers. Most of the original housing structures were then refurbished and resold as a residential community. Other buildings were given to cultural organizations like Midwest Young Artists Conservatory, the largest youth music program in the Midwest. Approximately 90 acres of the southern end of the original post were retained by the Army; there the Army now operates the Sheridan Reserve Center complex. This includes the Great Lakes Training Division, 75th Training Command (an Army Reserve Brigadier General command) as well as numerous Colonel and Lieutenant Colonel commands. Additionally, newly refurbished housing is part of the military enclave and is used for active duty and active guard/reserve personnel and families stationed at Ft. Sheridan and Great Lakes Navy Training Center.

The Fort Sheridan cemetery, established in 1889, is still an ongoing military burial site owned by the Federal Government. Retired armed forces members may be buried there.

In 1984 parts of Fort Sheridan were designated a National Historic Landmark District by the National Park Service. The National Park Service states that the site "possesses national significance in commemorating the history of the United States of America." The historic district includes 230 ares of land and buildings bounded by the Hutchinson and Bartlett Ravines and the shore of Lake Michigan. There are 94 buildings in the district. The buildings include: officers' quarters, barracks, stables, a drill hall, water tower, and many other institutional buildings. The 54-acre parade ground was preserved as an open space as well.

A forest preserve, operated by Lake County Forest Preserves, now sits on 250 acres of the former military fort. Since the 1980s the preserve had been working on acquiring land from the U.S. Army. In 1997, the Army began conveyance of the northern section of the former base. The third and final section was obtained in 2001.

All content from Kiddle encyclopedia articles (including the article images and facts) can be freely used under Attribution-ShareAlike license, unless stated otherwise. Cite this article:
Fort Sheridan, Illinois Facts for Kids. Kiddle Encyclopedia.