Highwood is a city in Moraine Township, Lake County, Illinois, United States located between Chicago and Kenosha. The city is also located just south of the Fort Sheridan Forest Preserve.

Originally, the land was owned by the Potawatomi until the 1833 when it was ceded to the United Stated through the Treaty of Chicago. The first non-native American settled in the town in 1846. In 1851 Highwood became the headquarter location of the Chicago North Shore and Milwaukee Railroad, which ran parallel to the Chicago and North Western Railway's and is now know today as Metra's Union Pacific/North line. Thomas Curley suggested the name High Woods because the land was the highest ground between Chicago and Milwaukee and was covered with trees.

In 1886 civil and labor unrest in Chicago eventually led to the Haymarket Riot. Chicago businessmen felt that having a military presence near the city would help alleviate tensions within the city and on November 8, 1887 purchased Camp Highwood. This land would come to host members of the Sixth Infantry Regiment. On February 27, 1888 Camp Highwood was officially named Fort Sheridan in honor of General Philip Sheridan for his ability to maintain order after the Chicago Fire of 1871.

Highwood, as it appeared south of Washington Avenue in 1946. Much of the city was already densely populated, although the southeast corner of the city appears to still be farmland. Much of present day Highland Park west of the city was open prairie and farmland.

Highwood provided several business and employment opportunities and following the fire, many of those who lost their home and a wave of immigrants settled into the town. Highwood can also give credit to much of their economic success to the Chicago and Milwaukee Electric Railway. However with increased transportation it also caused a sudden rise in gambling dens and illegal "blind-pig" taverns which catered to off duty soldiers. This eventually provoked federal authorities to enact the "Highwood Quadrangle" which prohibited the sale of liquor within 1 1/8th miles of the army base.

Fort Sheridan acted as an entertainment center for the town and on July 18, 1888 the trustees voted to change the name from Highwood to the Village of Fort Sheridan to capitalize on it's military glamour. However, 8 years later in 1894 the name was changed back to Highwood due to resident frustration and confusion with postal misrouting. The city's business district became filled with bars and taverns which led Theodore Roosevelt to call the city "one of the toughest towns in America"

In the 1920s a large number of Northern Italian immigrants (originally from Modena) moved to Highwood, many from Dalzell, a coal mining town in Bureau Co to seek jobs. The National Prohibition of Liquor at the time also attracted boot-leggers who smuggled large scales of liquor into the city. The fight to prevent Highwood from being known as a whisky den largely brought the community together.

During the Great Depression many residents came together to support the town and each other, and while civil service progress declined a sense of community deepened.

Following the start of World War II Fort Sheridan was used as an active training ground. By the end of the war Highwood had experienced another wave of immigration, this time a majority of immigrants coming from Europe and Mexico. Since then Highwood's business have continued to flourish and the city has become the destination for North Shore dining and nightlife. The city frequently hosts festivals for residents known as Celebrate Highwood which is hosted by the city chambers. 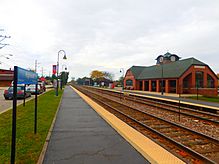 Highwood Metra Station located within the downtown of the city

The main highway to Highwood is US-41, which connects Chicago to Milwaukee. Commuter rail is available at two different Metra stations locations within the city (Fort Sheridan and Highwood) . Highwood is also located near the Highland Park and Lake Forest stations which all located on the Union Pacific- North line which begins in Kenosha and ends in the downtown area of Chicago at Ogilvie Transportation Center. 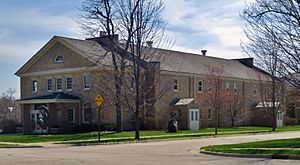 Once the movie theater for troops stationed at the army base, it is now the studio for Julie Rotblatt-Amrany and Omri Amrany, who are best known for the sculpture of Michael Jordan outside of the United Center

The Don Skrinar Recreation Center is a public facility located within the center of downtown Highwood. The city is also a host to the Midwest Young Artists (MYA) facilities and The Performer's School. The Fine Art Studio of ROTBLATT-AMRANY which is owned by Julie Rotblatt Amrany is located within the old village of Fort Sheridan.

There were 1,555 households out of which 29.8% had children under the age of 18 living with them, 43.2% were married couples living together, 10.0% had a female householder with no husband present, and 40.0% were non-families. 34.1% of all households were made up of individuals and 13.0% had someone living alone who was 65 years of age or older. The average household size was 2.60 and the average family size was 3.31.

All content from Kiddle encyclopedia articles (including the article images and facts) can be freely used under Attribution-ShareAlike license, unless stated otherwise. Cite this article:
Highwood, Illinois Facts for Kids. Kiddle Encyclopedia.