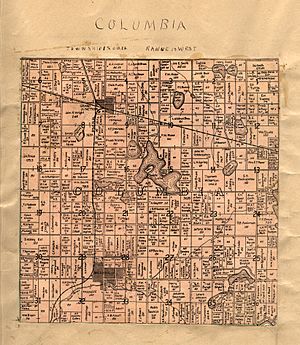 Columbia Township is a civil township of Van Buren County in the U.S. state of Michigan. The population was 2,714 at the 2000 census.

Columbia Township is a largely rural area with many farms. It is also home to several lakes with a significant percentage of the population living on them, frequently retirees from Chicago. Many summer lake cottages are owned by families with roots in the Chicago area.

There are three settlements in the township, none of them large.

The Kal-Haven Trail State Park goes through Columbia Township in an east-west direction, passing through both Berlamont and Grand Junction. The midpoint of the Kal-Haven trail is located in Bloomingdale.

There were 981 households out of which 31.5% had children under the age of 18 living with them, 58.7% were married couples living together, 10.0% had a female householder with no husband present, and 26.3% were non-families. 21.8% of all households were made up of individuals and 7.5% had someone living alone who was 65 years of age or older. The average household size was 2.70 and the average family size was 3.14.

All content from Kiddle encyclopedia articles (including the article images and facts) can be freely used under Attribution-ShareAlike license, unless stated otherwise. Cite this article:
Columbia Township, Van Buren County, Michigan Facts for Kids. Kiddle Encyclopedia.