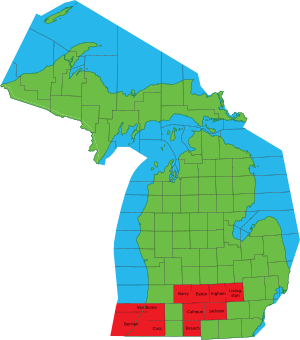 Michigan with the Cabinet counties in red

The Cabinet counties are ten counties in the southern part of the U.S. state of Michigan named after President Andrew Jackson and people who served in his Cabinet. The Michigan Territorial legislature created twelve counties in 1829, naming eight of them after members of the recently elected Jackson's cabinet. Cass County was also created in 1829 and named for Lewis Cass, the Territorial Governor at the time. Cass later served in Jackson's Cabinet, making a case for it to be included as a cabinet county. Livingston County was created in 1833 and named for Edward Livingston, Jackson's Secretary of State at the time.

The generally accepted reason for the naming of these counties after Jackson Administration members is that the Michigan Territory was trying to gain support of these officials in its border dispute with Ohio over the Toledo Strip.

In one of his last acts in office, Jackson signed the 1837 bill making Michigan the 26th state.

All content from Kiddle encyclopedia articles (including the article images and facts) can be freely used under Attribution-ShareAlike license, unless stated otherwise. Cite this article:
Cabinet counties Facts for Kids. Kiddle Encyclopedia.