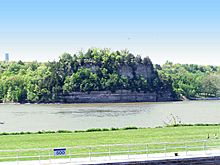 Starved Rock State Park is a state park in the U.S. state of Illinois. It is made by the many canyons within its 2,630 acres (1,064 ha). It is located just southeast of the village of Utica in LaSalle County, Illinois, along the south bank of the Illinois River. The park hosts over two million visitors annually, the most for any Illinois state park.

All content from Kiddle encyclopedia articles (including the article images and facts) can be freely used under Attribution-ShareAlike license, unless stated otherwise. Cite this article:
Starved Rock State Park Facts for Kids. Kiddle Encyclopedia.