Eden Prairie is an edge city 12 miles (19 km) southwest of downtown Minneapolis in Hennepin County, and the 12th-largest city in the State of Minnesota. It is on the north bank of the Minnesota River, upstream from its confluence with the Mississippi River. Eden Prairie and nearby suburbs form the southwest portion of Minneapolis–Saint Paul, the 15th-largest metropolitan area in the United States, with about 3.6 million residents. Eden Prairie had a population of 60,797 at the 2010 census, which made it the 7th-largest suburb in the Twin Cities and the 12th-largest city in Minnesota.

Comprising many large lakes and ponds, the city has more than 170 miles (270 km) of multi-use trails, 2,250 acres (9 km2) of parks, and 1,300 acres (5 km2) of open space. A bedroom suburb in the 1960s, the city is now home to more than 2,200 businesses and the headquarters of Digital River, SuperValu, C.H. Robinson Worldwide, MTS Systems Corporation, and the Minnesota Vikings. Regionally known for Eden Prairie Center, it is also the hub for SouthWest Transit, providing public transportation to three adjacent suburbs. KMSP and WFTC are also based in Eden Prairie. Eden Prairie has many walking trails around its beautiful lakes, namely Purgatory Creek and Staring Lake. Eden Prairie has been named one of Money Magazine's "Best Places to Live" in America since 2006; the city earned first place in the 2010 survey and second place in 2016.

For most of its existence, Eden Prairie has been a slow-growing, pastoral village on the far southwest fringes of the Twin Cities. Between 1880 and 1960, Eden Prairie’s population only grew from about 739 to 2,000.

Native Americans were the first to live in the area. Originally, the land was part of the Great Dakota Nation, but when the Ojibwa arrived from the Great Lakes region, the tribes began to clash over the land. The Ojibwa were armed with knives and guns traded to them by white settlers and fur traders, and after years of bloody warfare the Ojibwa had forced the Dakota to give up all their land east of the Mississippi River, and north of the Crow Wing River, land which did not include what is now Eden Prairie. On May 25, 1858, a battle was fought between the Dakota and the Ojibwa in the southern part of Eden Prairie, just north of the Minnesota River, an area referred to as Murphy's Ferry. The Ojibwa people wished to "avenge the murder" of one of their people committed the previous fall by the Dakota. The Ojibwa had 200 warriors, the Dakota somewhere between 60 and 70, but the Dakota proved victorious, wounding the young Chief of the Ojibwa tribe. The tribes continued to fight over territory well into the 1860s, even after the "Sioux Uprising" of 1862, when most of the Dakota people were removed from Minnesota. 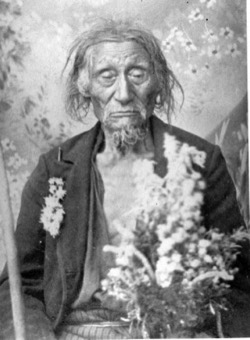 Among the notable Native Americans who lived in the Eden Prairie area was Chief Shoto. Born into the band of Chief Wabash, he went on to be the chief of the Red Wing Dakota tribe for 15 years, leaving them and becoming Chief of the "Little Six" band of Dakota until the uprising in 1862, during which he became a scout for then Governor Sibley from 1862 to 1870, returning to the Little Six band in 1872. He died in 1899 at the age of 99 at his home in Eden Prairie.

In 1851, a treaty opened land west of the Mississippi River to settlement allowing pioneers to settle in what is now Eden Prairie. Many early farmhouses are left in the town, and can be found on the National Register of Historic Places. One of these early settlers was John Cummins, an Irish-born immigrant who built what is now referred to as the "Cummins-Phipps-Grill House" with his wife Mattie in 1880. Manuscripts indicate that John Cummins was an avid and respected horticulturist, scientist, and farmer; he used his farmland to experiment with different strains of apples and grapes to try to find one that could withstand the harsh climate in Minnesota. The Cummins family sold this property to the Phipps family 1908.

Eden Prairie's town board held its first meeting in a log schoolhouse on May 11, 1858, the same day Minnesota became a state. Eden Prairie's farming community grew slowly over the years. Flying Cloud Airport was the first sign of big development in 1946. The 1960s and 1970s were decades of growth for the city's parks and recreation system. In the mid-1970s, the community gained a higher profile with the addition of Interstate Highway 494 and the Eden Prairie Shopping Center. Eden Prairie became a village in 1962, and a statutory city in 1974. A popular lake in Eden Prairie is Staring Lake, named for Jonah Staring, who built the first house by the lake. 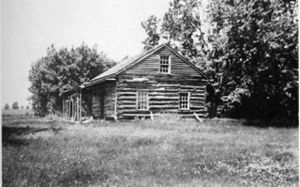 Originally named "Eden" in 1853 by a Mrs. Elliot, she chose this name because of her admiration of the "beautiful prairie" that occupies the southern portion of the town. 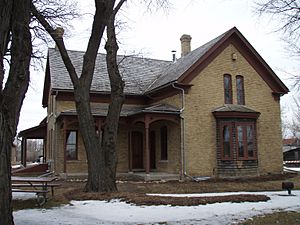 Current photo of the Cummins-Phipps-Grill House 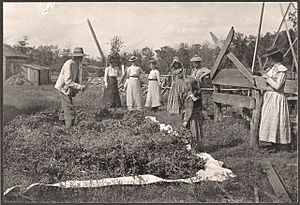 Flailing out Beans at Cummins Farm 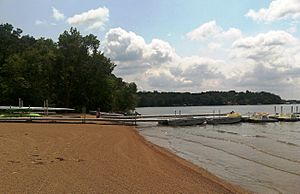 Bryant Lake, in Eden Prairie, originally named Bryant's Lake or one of many "Long Lake"s

There were 23,930 households of which 36.3% had children under the age of 18 living with them, 58.2% were married couples living together, 8.0% had a female householder with no husband present, 2.8% had a male householder with no wife present, and 31.0% were non-families. 25.1% of all households were made up of individuals and 6.1% had someone living alone who was 65 years of age or older. The average household size was 2.53 and the average family size was 3.08.

There were 20,457 households out of which 42.6% had children under the age of 18 living with them, 61.3% were married couples living together, 7.7% had a female householder with no husband present, and 28.7% were non-families. 22.0% of all households were made up of individuals and 3.4% had someone living alone who was 65 years of age or older. The average household size was 2.68 and the average family size was 3.20.

Eden Prairie raised over $400,000 from the community to build a veterans memorial in 2008. The memorial has two components, service to country and world peace. It was constructed in Purgatory Creek Park near the intersection of Technology Drive and Prairie Center Drive. World-class sculptor Neil Brodin designed and constructed two bronze sculptures. The service-to-country sculpture represents a wounded airman carried over the shoulders of a soldier in the battlefield. The world-peace sculpture depicts a woman servicemember touching a globe, honoring women who have served. Members of the community were able to purchase a place on the memorial for the names of loved ones who served in any branch of the U.S. service in any war or conflict. Minnesota-based Cold Spring Granite provided Mesabi black granite for the memorial's walls.

All content from Kiddle encyclopedia articles (including the article images and facts) can be freely used under Attribution-ShareAlike license, unless stated otherwise. Cite this article:
Eden Prairie, Minnesota Facts for Kids. Kiddle Encyclopedia.