Southwest LRT Trail is a system of shared-use paths for bicycles and pedestrian paths that extends through several western suburbs of Minneapolis, Minnesota. They are operated by the Three Rivers Park District. Two former rail corridors originally built by the Minneapolis and St. Louis Railway were acquired and converted to trails in anticipation of the Southwest Corridor light rail project. The two former railway corridors are now divided into three distinct trails. 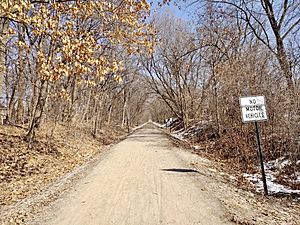 The trail in Eden Prairie, at a local road crossing

The Minnesota River Bluffs LRT Regional Trail is a trail that extends 12.26 miles (19.73 km) along the former Minneapolis and St. Louis right-of-way that brought the trail to Hopkins. It has a crushed limestone surface. It runs from the Hopkins Depot through Hopkins, Minnetonka, Eden Prairie, and Chanhassen. Together, the Cedar Lake LRT Trail and the Minnesota River Bluffs LRT Trail are about 15.5 miles (24.9 km) long. This trail has a partial closure south from Pioneer Trail in Chanhassen since 2014 due to significant mudslides and unsafe conditions and a detour is posted. Reconstruction of the damaged trail section is scheduled for summer 2020. The trail has about 250,000 people in attendance annually. The trail features bluffs of the Minnesota River and the lakes and forests of the area. The pedestrian bridge on the trail that spans Valley View Road replaced a 19-foot (5.8 m) railway bridge. Dubbed the Graffiti Bridge, it was featured in a 1990 Prince film. The bridge was a bottleneck in the growing city of Eden Prairie, and was demolished in 1991.

The route of the Southwest LRT light rail line is being built to follow the entire Cedar Lake LRT Regional Trail and a portion of the Minnesota River Bluffs LRT Regional Trail before turning southward near Shady Oak Road in Minnetonka. 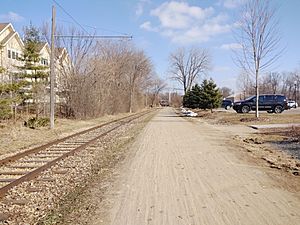 The trail in Excelsior, looking east

The Lake Minnetonka LRT Regional Trail runs for 15.92 miles (25.62 km) from 8th Avenue in Hopkins through Minnetonka, Excelsior, and Chanhassen to 81st Street in Victoria. The trail uses a crushed limestone surface. The It is connected to the Minnesota River Bluffs LRT trail via "The Artery" along 8th Avenue South in Hopkins, which opened in 2018. The trail is on a right-of-way originally built by the Minneapolis and St. Louis in the 1890s and abandoned by the Chicago and North Western in 1980 which branched off from the other rail line in Hopkins. There are about 471,000 people on the trail each year. Some places along the trail include Lake Minnetonka, restaurants in Hopkins and Excelsior, and historic places such as the Old Log Theatre and the Cottagewood General Store.

All content from Kiddle encyclopedia articles (including the article images and facts) can be freely used under Attribution-ShareAlike license, unless stated otherwise. Cite this article:
Southwest LRT Trail Facts for Kids. Kiddle Encyclopedia.