Cedar Lake Trail was the first federally funded bicycle commuter trail in the nation. It is known as the first "bicycle freeway" because it has three lanes for most of its length within Minneapolis: separate one-way lanes for bike traffic (like a divided highway) and third parallel lane for two-way pedestrian traffic. It is also considered a rail trail as the pathway follows a BNSF Railway line (the railroad's Wayzata Subdivision) west out of downtown Minneapolis. The North Cedar Lake Trail continues to follow that line until just west of Louisiana Avenue in St. Louis Park, where it begins turning southwest.

The Cedar Lake Regional Trail connects with other Minneapolis trails: 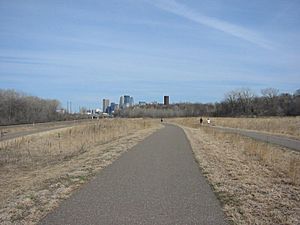 A look at the Cedar Lake Trail heading into downtown Minneapolis, from early spring of 2006. 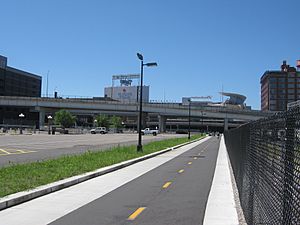 The trail is located in areas that were formerly railroad yards for the Great Northern Railway and the Minneapolis and St. Louis Railway. When Burlington Northern Railroad (the successor to Great Northern) consolidated its facilities elsewhere, and the Chicago and North Western (the successor to Minneapolis and St. Louis) dismantled the rail facilities, the land became available for use as parkland. It was at that time, starting in 1989, that the Cedar Lake Park Association rallied thousands of citizens and spearheaded (raising over $500,000) the campaign to purchase the land from the railroad and create Cedar Lake Park. Then in 1995, the association, along with the Minneapolis Park and Recreation Board and Minneapolis Public Works, lead the effort to create the Cedar Lake Regional Trail. An additional $500,000 in funding for the trail came from association members, the rest came from federal and state agencies, totaling $1.6 million. This amount funded the first two segments of the trail, from Highway 100 in the west, to Royalston Avenue near downtown Minneapolis, which were constructed in 1995.

Trail extensions in the 2010s

Phase III of the Cedar Lake Regional Trail, which extends the east end of the trail about 1 mile (1.6 km) under Target Field and past the Target Field train station to reach West River Parkway along the Mississippi River, began construction in the summer of 2010. It was expected to be completed in November 2010. Unfortunately the cold weather in October and November delayed completion of the trail to the river. This final trail segment officially opened with a ribbon-cutting ceremony on June 14, 2011.

The planned Southwest Corridor light rail line will parallel the Cedar Lake Trail from near Royalston Avenue southwest to just past Interstate 394, a distance of about 1.5 miles (2.4 km). At that point, the light rail line will diverge to the southwest parallel to the Kenilworth Trail. The line is currently expected to open in 2016. The Cedar Lake Park Association (CLPA), a grass-roots citizens group that spearheaded the campaign to buy the land and built the trail in the 1990s, noted in their Fall 2010 Update that an at-grade crossing of Cedar Lake Regional Trail and the Southwest LRT would pose several problems, including severe traffic flow restrictions for bicycles and pedestrians, as well as safety concerns. CLPA is advocating a grade-separated crossing.

The third and final segment of the trail, shadowing the Burlington Northern Santa Fe (BNSF) mainline through the heart of a dense urban infrastructure, cost $9.2 million, according to Minneapolis Public Works Project Manager Jack Yuzna. The final segment took over 11 years to plan and construct as alignments changed and entities such as the Minnesota Ballpark Authority sought to locate the new Twins stadium in the warehouse district. Eventually Target Field was built cantilevered out over the space for the trail and the BNSF moved its tracks to accommodate both the trail and the Ballpark Authority. During all of this time, indeed, since the first envisioning of a trail from Hwy 100 to the Mississippi River by Theodore Wirth III in his Cedar Lake Park & Trail Feasibility Study (1989), the Cedar Lake Park Association, a volunteer citizens-activist organization, has led the way. As Mayor R. T. Rybak noted in his speech at the ribbon-cutting ceremony, "Citizens groups like the Cedar Lake Park Association hold [public official's] feet to the fire to make sure projects like this get done."

All content from Kiddle encyclopedia articles (including the article images and facts) can be freely used under Attribution-ShareAlike license, unless stated otherwise. Cite this article:
Cedar Lake Trail Facts for Kids. Kiddle Encyclopedia.