Cedar Lake is a lake in Minneapolis, Minnesota, United States, and part of the city's Chain of Lakes. It is located on the west side of the city, north of Bde Maka Ska (formerly known as Lake Calhoun) and west of Lake of the Isles. The lake is surrounded by parkland on the west side, while the east side borders the Kenwood residential area. The north side is bordered by the Cedar Lake Trail and the BNSF Railway. Cedar Lake has an area of 169 acres (0.68 km2) and a maximum depth of 51 feet (16 m). Minneapolis Park and Recreation Board manages parkland around the lake. 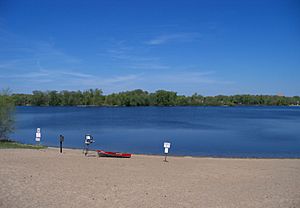 Cedar Lake is part of the Grand Rounds Scenic Byway, connecting with Theodore Wirth Park on the north end and Bde Maka Ska and Lake of the Isles on the south end via the parkway system. The Cedar Lake Trail, on the north shore of the lake, serves as both a recreational trail and a link for non-motorized commuters to reach downtown Minneapolis. The 1.68-mile (2.70 km) shared-use path has three separate lanes, a pedestrian lane and east-west lanes for bicyclists and other wheeled users. Other trails around the lake include separate bicycle and pedestrian trails on the west side of the lake, and the Kenilworth Trail a short distance off the east side of the lake. 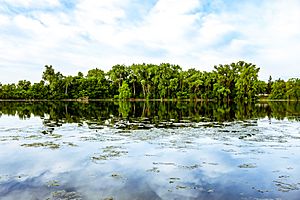 Cedar Lake in the Morning

All content from Kiddle encyclopedia articles (including the article images and facts) can be freely used under Attribution-ShareAlike license, unless stated otherwise. Cite this article:
Cedar Lake (Minneapolis) Facts for Kids. Kiddle Encyclopedia.