Chanhassen is a city about 16 miles (26 kilometres) southwest of Minneapolis in Carver County, Minnesota, United States. The population was 22,952 at the 2010 census.

The origin of the name comes from the Dakota word chanhasen meaning "sugar-maple tree" (chan, tree; haza, a tree with sap). The northern metro area Hassan Township carries the latter syllable of the word to avoid confusion. Chanhassen was ranked as the #2 best place to live in America in 2009 by Money Magazine, and fourth among small towns rated as best places to live in 2013.

U.S. Highway 212 and Minnesota State Highways 5 and 41 are three of the main routes in Chanhassen.

According to data from the US Census Bureau the median household income (using data from 2008 to 2012) for Chanhassen was $103,462. For the same time period the per capita income was $46,305. Three percent of the population was living below the poverty line.

There were 8,352 households, of which 42.5% had children under the age of 18 living with them, 65.9% were married couples living together, 6.4% had a female householder with no husband present, 2.6% had a male householder with no wife present, and 25.1% were non-families. 20.6% of all households were made up of individuals, and 6.3% had someone living alone who was 65 years of age or older. The average household size was 2.75 and the average family size was 3.23. 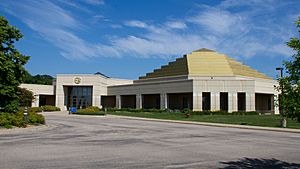 The Temple of ECK on the Eckankar Spiritual Campus

Chanhassen is home to several attractions that are well-recognized throughout the state and even nationally.

Chanhassen Dinner Theatres is the nation's largest professional dinner theatre, and the largest privately owned restaurant in the state of Minnesota. Since 1968, more than 200 plays have been produced and played to more than ten million guests.

The city of Chanhassen places a strong emphasis on parks, open space, trails and recreation.

Chanhassen prides itself on providing a comprehensive, multipurpose trail system. The city has built and maintains 70 miles of trails. Many of the city’s trails are located in natural resource corridors.

The Chanhassen Skate Park was installed in September 1999. The park is located between City Hall and the downtown fire station. It features a wedge, quarter pipe, half pipe, hotbox, doobie roller, spine and grind rails.

Many youth sports programs are offered through the Chanhassen Athletic Association, including baseball, softball, basketball, and soccer.

Several well-producing lakes in Chanhassen keep the sportsmen busy year-round with fishing during the warm months and ice fishing when the lakes freeze-over. Both Lake Minnewashta and Lake Ann contain large and aggressive northern pike for the adept anglers.

Companies with headquarters in Chanhassen include:

According to the city's 2019 Comprehensive Annual Financial Report (CAFR), the top employers in the city are:

Many youth sports programs are offered through the Chanhassen Athletic Association, including baseball, softball, basketball, and soccer.

All content from Kiddle encyclopedia articles (including the article images and facts) can be freely used under Attribution-ShareAlike license, unless stated otherwise. Cite this article:
Chanhassen, Minnesota Facts for Kids. Kiddle Encyclopedia.