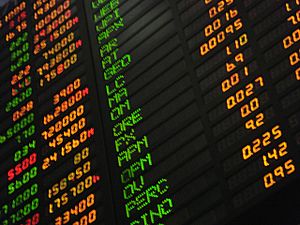 Speculation has a special meaning when talking about money. The person who speculates is called a speculator. A speculator does not buy goods to own them, but to sell them later. The reason is that he wants to make a profit from the change in price.

One tries to buy the goods when they are cheap and to sell them when they are expensive. There is a good chance to profit as long as the market price of a good changes often in different directions.

Speculation includes the buying, holding, selling, and short-selling of stocks, bonds, commodities, currencies, collectibles, real estate, derivatives or any valuable financial instrument. It is the opposite of buying because one wants to use them for daily life or to get income from them (as dividends or interest).

Speculation is one of the biggest market roles in western financial markets. The others are hedging, long term investing and arbitrage. Speculators do not plan to keep an asset for a long time.

All content from Kiddle encyclopedia articles (including the article images and facts) can be freely used under Attribution-ShareAlike license, unless stated otherwise. Cite this article:
Speculation Facts for Kids. Kiddle Encyclopedia.