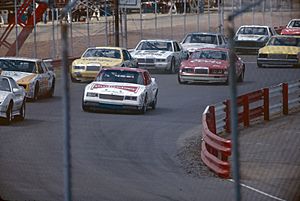 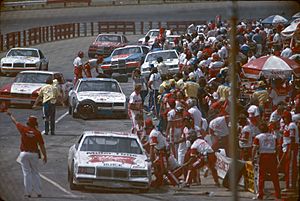 The pits during a 1985 NASCAR Cup race

Richmond Raceway (RR) is a 0.75 miles (1.21 km), D-shaped, asphalt race track located just outside Richmond, Virginia in unincorporated Henrico County. It hosts the NASCAR Cup Series, NASCAR Xfinity Series and the NASCAR Camping World Truck Series. Known as "America's premier short track", it has formerly hosted such illustrious events as the IROC series, Denny Hamlin Short Track Showdown, and the USAC sprint car series. Due to Richmond Raceway's unique "D" shape which allows drivers to reach high speeds, Richmond has long been known as a short track that races like a superspeedway. With its multiple racing grooves, and proclivity for contact Richmond is a favorite among NASCAR drivers and fans.

Richmond Raceway is the only track in NASCAR with multiple races on the schedule that hosts all of its events at night. The "Action Track" is noted for having sold out an incredible 33 consecutive NASCAR Cup Series races. The sellout streak ended in September 2008 partially due to the economic downturn, though the major factor in ticket sales was the impact of Tropical Storm Hanna. Richmond has hosted the final "regular-season" race, leading up to the start of the NASCAR Cup Series playoffs, each year since the concept was introduced in 2004 until 2018, when it was moved into the playoffs.

In 2010, the track introduced a state-of-the-art video scoring tower that boasts more LED square footage than any other in the motorsports industry. The cap features four HD LED screens that measure 38-feet wide by 24-feet high. The screens broadcast live race action and pre-produced video and graphics. The stem shows the running order and has the ability to rotate through the entire field. Prior to 2019, the raceway had track seating of 59,000.

Racing sports has a long tradition in Virginia, dating back to colonial English times. From 1898 to the first World War, the Deep Run Hunt Club the Northside area of Ginter Park was the site of the club's somewhat annual steeplechase race. After a decade hiatus, the annual races were moved to Curles Neck in 1928 on the south side of Richmond.

Shortly after the attack on Pearl Harbor, all auto racing was suspended due to the second World War. From 1942 to 1945, no events were contested, as they were prohibited by the US government primarily on account of rationing.

The 1946 AAA Championship Car season was unique in that it was the first post-war IndyCar race and because the Atlantic Rural Exposition had built a new state fairgrounds at the old Strawberry Hill Farm near Ginter Park. The ½ -mile dirt track would be suitable for both annual "Strawberry Hill" horse races and car races, and was known as the "Atlantic Rural Fairgrounds Track", "Strawberry Hill", and "Strawberry Hill Raceway" On October 12, 1946, Ted Horn gained the distinction of winning the track's first race in an open-wheel Indy-style car.

Two years later, when the NASCAR schedule was being formed, this short track joined several others on the circuit. In 1953, the track began hosting the Grand National Series with Lee Petty winning that first race in Richmond. The original track was paved in 1968. In 1988, the track was re-designed into its present D-shaped configuration.

The name for the raceway complex was "Strawberry Hill" until the Virginia State Fairgrounds site was bought out in 1999 and renamed the "Richmond International Raceway". The Strawberry Hill Races, which are a series of steeplechase horse races were formerly held the third Saturday of April at the Richmond Raceway Complex. In 2001, the races were moved to Colonial Downs in New Kent County, Virginia's first Thoroughbred racetrack.

Outdoor festivals that have been held there included the State Fair of Virginia, the Richmond Highland Games and Celtic Festival, the March of Dimes Bikers for Babies, the K95 Country Music Festival and the Virginia Food Festival.

Richmond Raceway is home to two NASCAR races in both the Cup Series and Xfinity Series.

There are a pair of fall races, usually held on the second weekend of September. The 250 lap (187.5 miles) Xfinity race is currently sponsored by Virginia 529 College Savings Plan and is named the Go Bowling 250. The 400 lap (300 miles) fall Cup race is currently sponsored by Federated Auto Parts and is named the Federated Auto Parts 400. Under the current schedule it is the final race before the playoff-style Chase for the Championship series of races that determine the Cup champion begins, and the last chance for drivers to earn a place in the Chase.

Until 2005, Richmond was home to a fall Craftsman Truck Series race. Starting with the 2006 schedule, that date was transferred to Talladega Superspeedway, and the series did not return to Richmond until 2020. Until 2009, Richmond was also home to a June IndyCar Series race. In July 2009, it was announced that IndyCar would not return to the Raceway in 2010. Richmond was scheduled to return to the IndyCar schedule in 2020, replacing Pocono Raceway after violent crashes at the track in 2018 and 2019 caused outcry from several drivers. The race was ultimately canceled however, due to the COVID-19 pandemic. 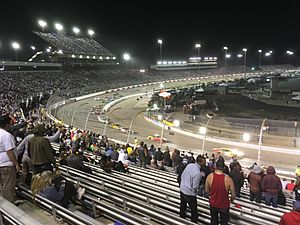 All content from Kiddle encyclopedia articles (including the article images and facts) can be freely used under Attribution-ShareAlike license, unless stated otherwise. Cite this article:
Richmond Raceway Facts for Kids. Kiddle Encyclopedia.