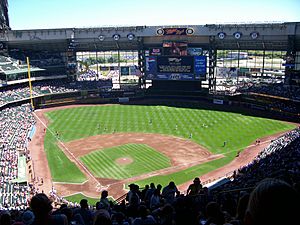 American Family Field, originally known as Miller Park, is a baseball park in Milwaukee, Wisconsin. It is the home field of the Major League Baseball team called the Milwaukee Brewers. It opened in 2001 to replace the old Milwaukee County Stadium that the Brewers played in. It was supposed to open in 2000, but a accident during construction delayed its opening. The first sponsor of the stadium was the Miller Brewing Company. Miller's contract with the stadium was for $40 million, and ran until January 1, 2021. American Family Insurance replaced Miller as the park's sponsor effective in 2021.

American Family Field has a roof shaped like a fan that can be opened and closed depending on the weather.

All content from Kiddle encyclopedia articles (including the article images and facts) can be freely used under Attribution-ShareAlike license, unless stated otherwise. Cite this article:
American Family Field Facts for Kids. Kiddle Encyclopedia.