Kids Encyclopedia Facts
This page is about the neighborhood of Miami. For other uses, see Cocoanut Grove (disambiguation).

Coconut Grove, also known colloquially as The Grove, is the oldest continuously inhabited neighborhood of Miami in Miami-Dade County, Florida, United States. The neighborhood is roughly bound by North Prospect Drive to the south, LeJeune Road to the west, South Dixie Highway (US 1) and Rickenbacker Causeway to the north, and Biscayne Bay to the east. It is south of the neighborhoods of Brickell and The Roads and east of Coral Gables. The neighborhood's name has been sometimes spelled "Cocoanut Grove" but the definitive spelling "Coconut Grove" was established when the city was incorporated in 1919. 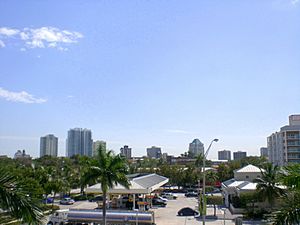 Skyline of Coconut Grove, as seen from its respective Metrorail station 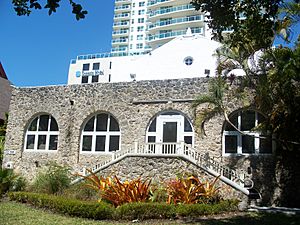 The clubhouse of the Woman's Club of Coconut Grove, built in 1921 and designed by Miami architect Walter de Garmo

Several waves of immigration established Coconut Grove, the first in 1825, when the Cape Florida lighthouse went into operation and was manned by John Dubose. Dr. Horace P. Porter is credited for coming up with the name when in 1873 he rented a home from Edmond D. Beasley’s widow, who homesteaded 160 acres of bay front property. He lived there for only a year but during that time he established a post office which he named Coconut Grove. Around the same time the area saw an influx of Americans from the Northeastern US, as well as British and white Bahamian immigrants. The first hotel on the South Florida mainland was located in Coconut Grove. Called the Bay View Inn (later known as the Peacock Inn), it was built in 1882, on the site of present-day Peacock Park, by English immigrants Isabella and Charles Peacock, who had been the owner of a wholesale meat business in London. Coconut Grove's first black settlement, in the 1880s, was established by Bahamian laborers who worked at the Peacock Inn. The Barnacle Historic State Park is the oldest house in Miami-Dade County still standing in its original location. It was built in 1891 and was home to Ralph Middleton Munroe, also known as "The Commodore" for being the first commodore and founder of the Biscayne Bay Yacht Club, an American yacht designer and early resident of Coconut Grove.

Formerly an independent city, Coconut Grove was annexed by the city of Miami in 1925. In the 1960s, bay-shore Coconut Grove served as the center of South Florida's youth countercultural movement, notably hosting several love-ins and concerts (including a now-infamous Doors concert at Dinner Key Auditorium) during the latter part of the decade.

The "West" Grove is predominantly composed of people who are of Afro-Bahamian descent. Bahamian sailors were one of the first groups of settlers in the area. The Goombay festival is a celebration of the rich history of this historically Bahamian neighborhood.

Coconut Grove is served by Metrobus throughout the area, and by the Miami Metrorail at:

Metrobus' Coconut Grove Connection connects at Coconut Grove and Douglas Road stations, going to many popular areas within the Grove, including CocoWalk and Peacock Park. 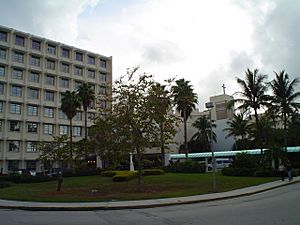 Mercy Hospital in the Grove 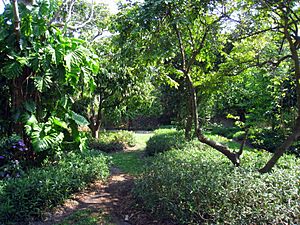 The Kampong is a botanical garden in the Grove. The Grove is well known for its wild foliage and large tree coverage. 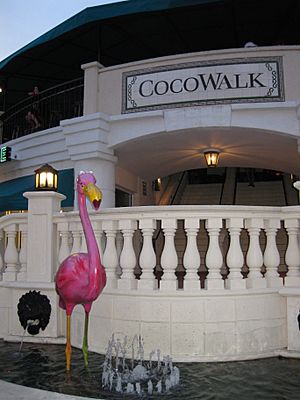 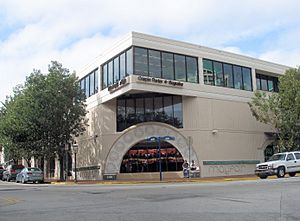 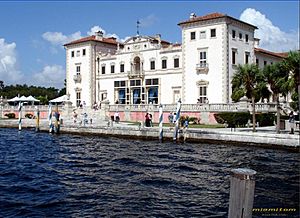 Villa Vizcaya, built in 1916, is a popular Miami tourist attraction.

Coconut Grove has a number of outdoor festivals and events, the most prominent of which is the annual Coconut Grove Arts Festival. Others include the King Mango Strut, which began as a parody of the Orange Bowl Parade, and which continues each year on the last Sunday in December. The Great Taste of the Grove Food & Wine Festival takes place each April. Each June, the Goombay Festival transforms Grand Avenue in Coconut Grove into a Carnaval (Caribbean Carnival), celebrating Bahamian culture, with Bahamian food and Caribbean music (Junkanoo).

The Grove has numerous restaurants, open air and streetside cafes, and several waterfront restaurants and bars. By night, the Grove becomes a center of nightlife frequented by locals, young professionals, students from the nearby University of Miami and Florida International University, and tourists.

Shopping is abundant in the Grove, with two open-air malls, CocoWalk, the Streets of Mayfair, and many other street shops and boutiques.

The Village Center, the three blocks radiating from and focusing on the intersection of Main, McFarland, and Grand Avenues, home to the majority of the retail and restaurant business in the Grove, is also home to three gyms, a multiplex movie house in CocoWalk, several parking garages, a state historic site, an elementary school, a City of Miami fire station, several large condos and residential rental towers, the Coconut Grove Post Office, and two sizable parks. Development and redevelopment continue to redefine and transform the area.

Major corporations including Arquitectonica, Spanish Broadcasting System, and Watsco are located in the Grove.

The eastern border of Coconut Grove is Biscayne Bay, which lends itself to the local boating and sailing communities. The area features the Coconut Grove Sailing Club, Coral Reef Yacht Club, Biscayne Bay Yacht Club, and a sizable municipal marina, Dinner Key Marina. The US Sailing Center is on the Bay between Kennedy Park and the Coral Reef Yacht Club. Pan Am's seaplane operations were based at Dinner Key, and the Miami City Hall is based in the old Pan Am terminal building. 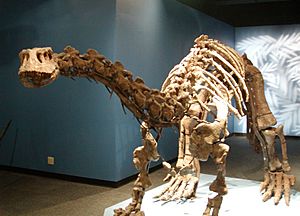 Former and current residents include:

All content from Kiddle encyclopedia articles (including the article images and facts) can be freely used under Attribution-ShareAlike license, unless stated otherwise. Cite this article:
Coconut Grove Facts for Kids. Kiddle Encyclopedia.