The Roads facts for kids

The Roads is a neighborhood of Miami in Miami-Dade County, Florida, United States. It is a triangular area located south of SW 11th Street, between SW 12th Avenue and SW 15th Road, just west of Brickell.

The Roads is known for its old homes, historic private schools, and its tree-covered streets. The Roads is very close to Downtown and Brickell, but is a historically residential neighborhood. It is also off the normal Miami street grid, and thus all the streets in The Roads are named roads, instead of streets and avenues, as is the case in the rest of Miami. Since 1986, the Miami Roads Neighborhood Civic Association has worked on a variety of projects to support the neighborhood.

The Roads, originally called "Brickell Hammock" was designed, platted and developed by Mary Brickell in January 1922 days before her death. Mary Brickell had designed the Roads as a pedestrian-friendly neighborhood, with wide streets with median parkways and roundabouts with native Miami plants. Mary Brickell gave the streets, parkways, sidewalks, and electric lighting to the City of Miami in 1922. All the properties were sold in a single day on February 1, 1923. 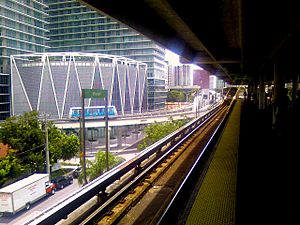 The Roads is served by Metrobus throughout the area, and by the Miami Metrorail at:

Metrorail has stops throughout Miami with service to Greater Miami and Miami International Airport, all Miami-Dade County bus lines, Tri-Rail and Amtrak. The main bus station in Downtown is located next to the Arsht Center.

All content from Kiddle encyclopedia articles (including the article images and facts) can be freely used under Attribution-ShareAlike license, unless stated otherwise. Cite this article:
The Roads Facts for Kids. Kiddle Encyclopedia.