Kids Encyclopedia Facts
This page is about the neighborhood. For the road, see Coral Way (street).

Coral Way is a neighborhood within Miami, Florida that is defined by Coral Way, a road established by Coral Gables founder George E. Merrick during the 1920s. It is located in Miami-Dade County, Florida, United States.

The Coral Way neighborhood is served by the Miami Metrorail at Vizcaya (South Dixie Highway/US 1 and West First Avenue) and Coconut Grove stations (US 1 and West 27th Avenue/SR 9).

The Architecture in the Coral Way neighborhoods reflects the early-20th Century. Some of the oldest sections contain a mixture of Mission Revival Style architecture and Bungalow homes of the 1920s, along with the Art Deco style from the 1930s and the modest post-World War II dwellings.

The Coral Way area is best known for its historic urban boulevard along SW 22nd Street (Coral Way). One of the main thoroughfares between Coral Gables and the City of Miami, Coral Way passes through the City of Miami between SW 37th Avenue and Brickell Avenue. The Coral Way Corridor began in 1922 with citrus lined streets; later growing to have streetcar tracks down the center of the road, connecting Downtown Miami to Coral Gables. In 1929, a Roadside Beautification Program was started, and 1200 Banyan trees were planted along the median of the boulevard. Today, Coral Way remains one of the most beautiful corridors in South Florida.

Coral Gate is a smaller sub-neighborhood within the larger Coral Way neighborhood. It is roughly located south of SW 16th Street, east of SW 37th Avenue, north of Coral Way and west of SW 32nd Avenue. Coral Gate borders Coral Gables to the west and Golden Pines to the south. The north and east boundaries of Coral Gate are enclosed by walls or street barriers with all vehicles blocked from entering or exiting through these directions. 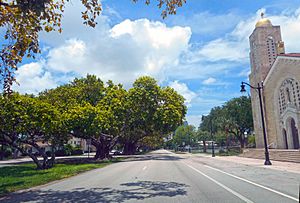 Coral Way is served by Metrobus throughout the area, and by the Miami Metrorail at:

The Consulate-General of Costa Rica in Miami is located in Suite 401 at 2730 SW 3rd Avenue in Coral Way.

All content from Kiddle encyclopedia articles (including the article images and facts) can be freely used under Attribution-ShareAlike license, unless stated otherwise. Cite this article:
Coral Way Facts for Kids. Kiddle Encyclopedia.