Grove Isle is a 20-acre (81,000 m2) island lying off the north-east coast of Miami's Coconut Grove neighborhood. Three waterfront hi-rise residences have been built on the island which were master-planned to include a resort hotel, restaurants, marina, club amenities and services. 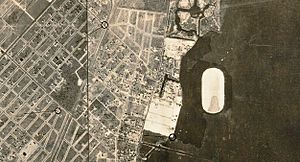 First known as Fair Isle, its land was dredged out from Biscayne Bay in 1924 by the Corps of Engineers and subsequently subdivided in 1925. Many artificial islands of the period, such as Fair Isle, were formed when artificial inlets were cut into Biscayne Bay's coastline. The isle was then sold to investors at the height of the Florida Land Boom in less than four hours and for over $1.5 million. A combination of real estate crash, freight blockades and hurricane damage during 1925–26 stalled further property development of Miami and the island. 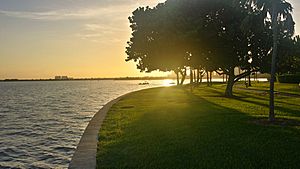 Grove Isle provides one of the most secluded spots to live in Miami and is highly prized "by residents for its tranquillity and panoramic bay views". Its residents have included past Heads of State, Senators, judges, lawyers, doctors, corporate leaders, entrepreneurs and philanthropists. Grove Isle has been described as one of the most affluent neighborhoods in the United States.

The Palmeiras Beach Club and Hotel, Spa, Grove Isle Marina and Cliff Drysdale Grove Isle Tennis Club were located on the island. The world-class Grove Isle Sculpture Garden once comprised part of the island's landscaped design. The three residential towers' interior designs were unique in the area for their Asian themes and accents. The island club restaurant, operating under the name of Baleen and then Gibraltar, were well regarded in their time.

The island's wide open spaces and expansive tree canopy are valued highly by its residents. The gardens and decks of Grove Isle were replanted after damage received from Hurricane Irma in September 2017. Major renovations to improve the structural and aesthetic integrity of the three towers, their decks and the gardens were also undertaken. The retention of the island's tree canopy and its mature trees remain a priority for many on Grove Isle and in Coconut Grove.

A further residential development on the site of the Island's hotel and club was first proposed in 2013.

All content from Kiddle encyclopedia articles (including the article images and facts) can be freely used under Attribution-ShareAlike license, unless stated otherwise. Cite this article:
Grove Isle Facts for Kids. Kiddle Encyclopedia.