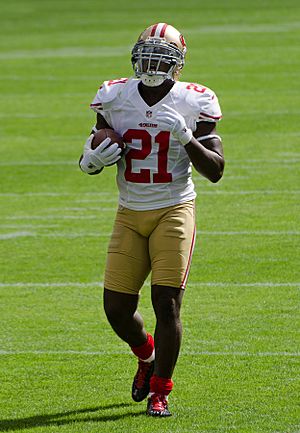 Franklin Delano "Frank" Gore (born May 14, 1983) is an American football player. He plays the position running back. He plays for the San Francisco 49ers. He played football for the University of Miami. He was drafted by the 49ers in the third round of the 2005 NFL Draft.

All content from Kiddle encyclopedia articles (including the article images and facts) can be freely used under Attribution-ShareAlike license, unless stated otherwise. Cite this article:
Frank Gore Facts for Kids. Kiddle Encyclopedia.