Willis Andrew McGahee, III (born October 21, 1981) is a former American football running back. He played college football for the University of Miami, and was recognized as an All-American. He was drafted by the Buffalo Bills in the first round of the 2003 NFL Draft. He also played in the National Football League (NFL) for the Baltimore Ravens, Denver Broncos and Cleveland Browns.

McGahee played college football as a runningback for the Miami Hurricanes. He had 2,067 career rushing yards on 349 carries (5.9 avg.) for 31 touchdowns, which ranked 5th on school’s all time records list. He also caught 25 passes caught for 355 yards on a 13.1 average.

McGahee was drafted by the Buffalo Bills with the 23rd pick in the 2003 NFL Draft. McGahee did not play at all in his first season. This was because McGahee was only a rookie, was dealing with injuries, and Travis Henry was already a starter. However, McGahee passed 1,000 yards the next two seasons and scored 13 total times in 2004. In 2006, McGahee's rushing total dropped to 990 yards on 259 carries, plus six touchdowns. He wore #21.

The Bills traded McGahee to the Baltimore Ravens. McGahee was voted to his only Pro Bowl in 2007 for Baltimore after rushing for 1,207 yards on 294 carries and eight total touchdowns. However, the Ravens missed the playoffs on a 5-11 mark. McGahee was about the only offensive brightspot for the Ravens that year, wearing #23.

In 2008, McGahee struggled with injuries. His statistics dropped to 170 attempts, 671 yards, and 7 scores, including a 77 yard touchdown to help win a game against the Dallas Cowboys. He was carted off the field after colliding (hitting into) Pittsburgh Steelers safety Ryan Clark in an AFC Championship loss. 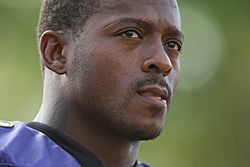 On July 26, 2011, McGahee (and Kelly Gregg, Derrick Mason, and Todd Heap) were released to help give younger players a chance and save salary cap space.

McGahee signed with the Denver Broncos. He rushed for 249 yards, 1,999 yards, and five total touchdowns for Denver.

In 2014, McGahee played for the Cleveland Browns.

All content from Kiddle encyclopedia articles (including the article images and facts) can be freely used under Attribution-ShareAlike license, unless stated otherwise. Cite this article:
Willis McGahee Facts for Kids. Kiddle Encyclopedia.