Kendall is a census-designated place in Miami-Dade County, Florida, United States. At the 2010 census, the area had a population of 75,371.

While the US Census Bureau has set definite boundaries for Kendall as a CDP, the community has a highly ambiguous local definition. Prior to the 1950s, the term "Kendall" was used to describe a region centered around U.S.-1, bounded by Snapper Creek to the north, the Everglades to the west, Old Cutler Road to the east, and the former community of Rockdale to the south. This area was largely uninhabited, generally consisting of pine rockland interspersed with fields and groves. As the region experienced rapid development in the 1950s, the moniker "Kendall" came to refer to the various communities built in the vicinity of present-day Pinecrest and the eastern half of the current Kendall CDP. When growth shifted west in the 1970s, 80s, and 90s, the usage of the term steadily shifted west concurrently, and today it is most often applied to the area more formally known as West Kendall. Prior to incorporation in 1996, the Village of Pinecrest was still included in the official boundaries of Kendall CDP.

Kendall is served by the Miami Metrorail at Dadeland North and Dadeland South stations in its northeastern end. Both stations provide metro service from Dadeland to nearby commercial centers like the City of Coral Gables, Downtown Miami, and Miami International Airport. Dadeland South station is a major transit depot in the area, connecting the southernmost cities of Homestead and Florida City to Metrorail via limited-stop bus rapid transit along the South Miami-Dade Busway.

Much of what is now Kendall was purchased from the State of Florida in 1883 by the Florida Land and Mortgage Company. It was named for Henry John Broughton Kendall, a director of Florida Land and Mortgage who moved to the area in the 1900s to manage the company's land. As the land was not open to homesteading, development was slow well into the 20th century. A post office opened in 1914, and the first school opened in 1929. After the end of the land boom in 1926, some residents left. Two Seminole camps were in the Kendall area, and Seminoles continued to live there into the 1940s. 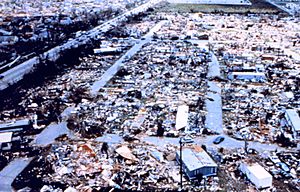 In August 1992, Kendall and the surrounding South Dade area were severely damaged by Hurricane Andrew. Many of the homes and businesses in the area were completely destroyed. In the subsequent years, the area was slowly rebuilt.

Climate in Kendall is naturally similar to the remainder of Miami-Dade County, although its location and elevation inland along the Miami Rock Ridge does make it slightly cooler at night during the winter and slightly warmer during the day in the summer.

Kendall is served by Metrobus throughout the area, and by the Metrorail at:

Prior to its dissolution, Air Florida was headquartered in the Dade Towers in what is now the Kendall CDP.

The first public school in Kendall was Kendall School, now renamed Kenwood K-8 Center. Kenwood is the site of the Kenwoods Hammock, a native forest planting which has become a world-renowned stop for bird watchers.

Holy Cross Academy was formerly in Kendale Lakes CDP, near Kendall. It closed in 2004.

Miami Hoshuko, a weekend school for Japanese citizens, previously held classes at the Kendall United Methodist Church, now in Pinecrest but formerly in the Kendall CDP as of 1990.

All content from Kiddle encyclopedia articles (including the article images and facts) can be freely used under Attribution-ShareAlike license, unless stated otherwise. Cite this article:
Kendall, Florida Facts for Kids. Kiddle Encyclopedia.