Boynton Beach is a city in Palm Beach County, Florida, United States. The population was 68,217 at the 2010 census. In 2019, the city had an estimated population of 78,679 according to the University of Florida, Bureau of Economic and Business Research. Boynton Beach is a principal city of the Miami metropolitan area, which was home to an estimated 6,012,331 people at the 2015 census. 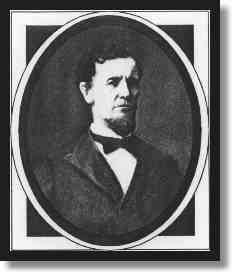 In 1894, two years before Henry Morrison Flagler built his railroad, a former American Civil War major named Nathan Boynton first set eyes on the area that now bears his name. Boynton hailed from Port Huron, Michigan. He was so impressed by the natural beauty of the year-round sunshine and pristine beaches, he built the famous Boynton Hotel, where he also spent winters with his family. The first settlers, whom Boynton had brought along from Michigan, soon realized that many fruits and vegetables thrived in the fertile climate. Pineapples, tomatoes, mangoes, and citrus fruit were packed in crates and shipped by the ton on the newly built Florida East Coast Railroad to satisfy the appetites of hungry Americans across the country. Major Boynton died on May 27, 1911 in Port Huron, but the hotel lasted until 1925. 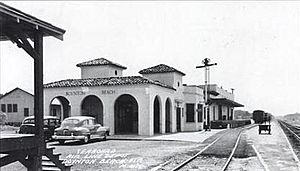 A 1940s view of the Boynton Beach Seaboard Air Line Railroad depot, whose demolition was authorized by the city in 2006

In 1926, the Seaboard Air Line Railway entered what was then simply Boynton, spurring land development a mile inland near the Seaboard station, including the town's first planned subdivision, Lake Boynton Estates. As land became more valuable, areas along the Intracoastal Waterway and the Federal Highway in Boynton also saw housing developments. To the west, many dairies were founded so that the Boynton area became the main milk supplier for Palm Beach County. By the 1970s, the dairies were no longer profitable and these lands too were converted to housing developments.

Boynton Beach Oceanfront Park is located just north of the original Boynton Hotel site. In 1921, the Town of Boynton acquired the beach site from Lewis S. Howe by eminent domain for park and recreation purposes. The beach casino was built in 1928 and featured a large dining hall, locker rooms and showers and residents used the casino for parties and social gatherings. The casino was demolished in 1967 and the property remained part of the beach park.

From the 1920s to today, Boynton Beach Oceanfront Park has been popular with residents and visitors alike. In the mid-1990s, the park underwent a major renovation during which the boardwalk was rebuilt out of recycled plastic. Boynton Beach's Oceanfront Park was voted the best family beach in Palm Beach County by The Palm Beach Post in 2001. In 2011 the boardwalk was renovated again, replacing the plastic with Ipe (pronounced ee-pay) wood (commonly known as Brazilian Walnut). In 2012 improvements were made to the buildings along the boardwalk, including total refurbishment of the restrooms.

Hurricane Wilma struck Boynton Beach on October 24, 2005, causing widespread damage to homes and businesses. In 2006, the city government authorized the demolition of the historic Seaboard rail station, which had survived intact in private hands since passenger service to the station halted in 1971. 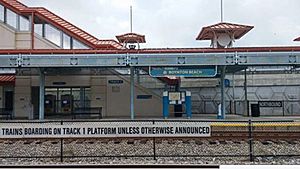 Boynton Beach is served by a Tri-Rail station of the same name linking Boynton Beach to West Palm Beach to the north and Miami to the south. It is also serviced by local buses provided by PalmTran.

All content from Kiddle encyclopedia articles (including the article images and facts) can be freely used under Attribution-ShareAlike license, unless stated otherwise. Cite this article:
Boynton Beach, Florida Facts for Kids. Kiddle Encyclopedia.