Bradenton ( bray-DƏN-tən) is a city and the county seat of Manatee County, Florida, United States. As of the 2020 census,the city's population is 55,698. 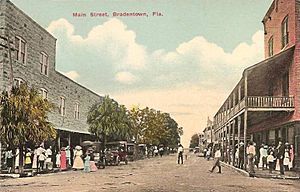 The area that would become Bradenton (originally spelled "Bradentown") was explored in 1539 by the Spanish during the famous expedition led by Hernando De Soto. Bradenton was established in 1842. The original town of Bradentown was incorporated in 1903. The city took the name of Dr. Joseph Braden, whose nearby fort-like house was a refuge for early settlers during Seminole Indian attacks. The current city of Bradenton was formed in 1943, when the Florida legislature merged the cities of Manatee (incorporated in 1888) and Bradentown.

Historic properties in Bradenton include:

Bradenton is located on US 41 between Tampa and Sarasota. The area is surrounded by waterways, both fresh and saltwater. Along the Gulf of Mexico and into Tampa Bay are over 20 miles (32 km) of Florida beaches, many of which are shaded by Australian pines. Bordered on the north by the Manatee River, Bradenton is located on the mainland and is separated from the outer barrier islands of Anna Maria Island and Longboat Key by the Intracoastal Waterway.

Downtown Bradenton is located in the northwest area of the city. Home to many of Bradenton's offices and government buildings, the tallest is the Bradenton Financial Center, 12 stories high, with its blue-green windows. The next tallest is the brand new Manatee County Judicial Center with nine floors, located next to the historic courthouse. Other major downtown buildings include the Manatee County Government building and the headquarters of the School Board of Manatee County.

The eastern side of Bradenton is growing at a rapid rate. Starting as the popular subdivision Lakewood Ranch, it is now becoming a heavily populated part of town. Most of the communities are newer than in West Bradenton. However the majority of foreclosures in Manatee County have taken place in that area due to the fact that a much higher loss in value happened compared to the areas of West Bradenton which is located nearer to the beaches.

Bradenton is a principal city of the North Port–Sarasota–Bradenton metropolitan statistical area, which had a 2018 estimated population of 821,573.

Bradenton is served by Sarasota-Bradenton International Airport in nearby Sarasota, Florida and is connected to St. Petersburg, Florida by the Sunshine Skyway Bridge. The Sunshine Skyway is a 5.5-mile (8.9 km) cross-bay bridge that rises 250 feet (76 m) above the bay at its highest point. Remnants of the old Skyway bridge have been converted into a fishing pier extending into Tampa Bay from both sides of the bay. 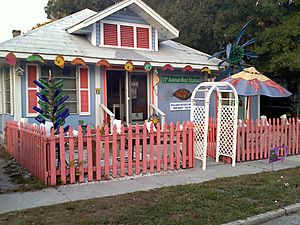 Some of the restored homes 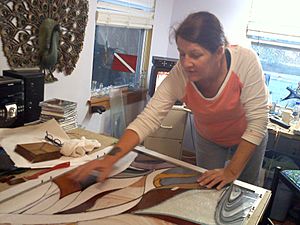 Hard at work in the studio

Located on the Manatee River in downtown Bradenton is the South Florida Museum, Bishop Planetarium and Parker Manatee Aquarium. This one-stop museum-planetarium-aquarium offers a glimpse of Florida history, a star and multimedia show, and ongoing lecture and film series. The Parker Manatee Aquarium is the permanent home to Manatee County's most famous resident and official mascot, Snooty, the manatee. Born at the Miami Aquarium and Tackle Company on July 21, 1948, Snooty was one of the first recorded captive manatee births. He is the oldest manatee in captivity, and likely the oldest manatee in the world.

The nonprofit organization Realize Bradenton works with the above-listed cultural partners to promote Downtown Bradenton as a destination for the arts. It also produces events in the downtown area with a focus on arts & culture like the annual Bradenton Blues Festival, ArtSlam public art festival as well as several smaller public art and music events throughout the year.

Additionally, the town is the subject of the We The Kings song "This Is Our Town"; they, as well as the band Have Gun, Will Travel originate from Bradenton. 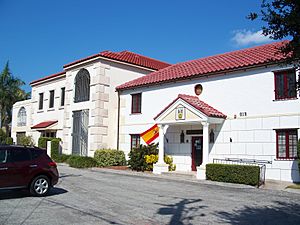 Tropicana Products was founded in Bradenton in 1947 by Anthony T. Rossi, an Italian immigrant. By 2004 it had over 8,000 employees and marketed its products throughout the United States. PepsiCo, Inc., acquired it in 1998. Tropicana's juice trains have been running to northern markets via CSX and predecessor railroads since 1971. In 2003, Pepsi relocated Tropicana's corporate headquarters to Chicago after it acquired Gatorade and consolidated its non-carbonated beverage businesses. However, their juice production facilities remain in Bradenton.

Bradenton was significantly affected by the United States housing market correction, as reported by CNN, projecting a 24.8% loss in median home values by the third quarter of 2008. Real estate has shown a recovery since 2012, as home prices stabilize and inventory subsides.

Bradenton is the spring training home of Major League Baseball's Pittsburgh Pirates who play their home games at downtown's LECOM Park. During the regular baseball season, the stadium is home to the minor league Bradenton Marauders who play in the Florida State League in Class A-Advanced.

The city is home to the State College of Florida, Manatee–Sarasota Manatees sports teams.

Manatee County high schools produce several teams including Manatee High School whose football team was nationally ranked in the 1950s, 1980s, and 1990s and regained their national status in 2009. Manatee High School has won five football state championships. Bradenton is also home to the IMG Academy, the home of the U.S U-17 residential soccer program.

The Concession Golf Club in Bradenton was home of the 2015 NCAA Division I Men's Golf Championship.

All content from Kiddle encyclopedia articles (including the article images and facts) can be freely used under Attribution-ShareAlike license, unless stated otherwise. Cite this article:
Bradenton, Florida Facts for Kids. Kiddle Encyclopedia.