The Bradenton Carnegie Library is a Carnegie library in Bradenton, Florida. It was founded in 1918, served as Bradenton's main library for 60 years, and now houses the Manatee County Historical Records Library. In April, 1987, it was added to the U.S. National Register of Historic Places.

Steel magnate and philanthropist Andrew Carnegie provided funding for more than 3,000 Carnegie libraries in the United States, Canada, and Europe. The Bradenton Carnegie Library, in Bradenton, Florida, was one of ten Florida Carnegie libraries to receive grants from the Carnegie Corporation of New York between 1901 and 1917, six of which still stand. 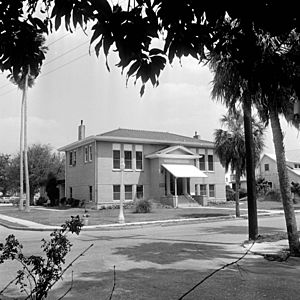 The library was built in the Classical Revival style to Carnegie Library Plans #205. Carnegie Libraries were normally constructed with basements, however due to being in Florida this was not able to occur, so the library is two stories tall to fulfill requirements. The original Bradenton Carnegie library opened in 1918 and served as Bradenton's main library for 60 years.

Although its address is 1405 Fourth Avenue, West, the library actually faces onto 14th Street, West. The original 14th Street facade has been obscured by an addition that did not follow the style of the original building.

On April 9, 1987, it was added to the U.S. National Register of Historic Places.

Today, it is the Historical Records Library operated by the office of the Manatee County Clerk of the Circuit Court, and houses governmental records, marriage licenses, maps, yearbooks, voter registration books, and military discharge books among many other items, that date back to 1856. The library also houses the Herb Loomis Manatee County Postcard Collection and the Steve Belack Crosley collection. Its staff provide assistance to researchers and those seeking to learn about the county's history.

All content from Kiddle encyclopedia articles (including the article images and facts) can be freely used under Attribution-ShareAlike license, unless stated otherwise. Cite this article:
Bradenton Carnegie Library Facts for Kids. Kiddle Encyclopedia.