Bradenton Riverwalk (known locally as the Riverwalk) is a 1.5-mile-long (2.4 km) public green space located along the Manatee River in Bradenton, Florida, between Business US 41 and South Tamiami Trail (US 301 / US 41 concurrently).

The five-acre (2.0 ha) park opened to the public on October 18, 2012 and features a skatepark, 400-seat amphitheater, playgrounds, and a splash pad. The area is maintained by the city of Bradenton and the nonprofit organization Realize Bradenton. 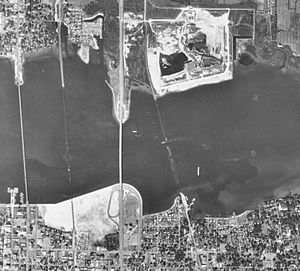 In the 1960s Bradenton dredged the Manatee River for silt, to add 50 acres (0.20 km2) of land adjacent to its downtown area. The area was dubbed "The Sand Pile" due to the river dredging projects. The park, Anthony T. Rossi Waterfront Park (or known simply as Waterfront Park or Rossi Park), was originally developed in the 1980s with the help of a federal grant. The boundaries of Rossi Park were from the Green Bridge (Business US 41 / 9th Street West) to the Hernando DeSoto Bridge (US 301 / US 41 / 1st Street). The Bradenton Downtown Development Authority (BDDA) hired Kimley-Horn and Associates, Inc. in June 2010 to design a substantial improvement to Rossi Park and the surrounding waterfront area. The construction of the Riverwalk broke ground in September 2011 and opened to the public on October 18, 2012.

The Bradenton Riverwalk spans from slightly west of the Green Bridge, near South Florida Museum, to 2nd Street East, adjacent to Manatee Memorial Hospital. The Riverwalk includes playgrounds, splash pad, a lawn for picnics, a day dock for boaters, a skatepark, a botanical walk, sand volleyball courts, and a 400-seat Mosaic Amphitheater.

Public art is displayed throughout the Riverwalk area. One of the permanent art collections displayed is Postcards from the Friendly City. The collection consists of various large-scale art panel "postcards" depicting the history of the Manatee River and Bradenton area.

Several weekly, monthly, and annual events, hosted by Realize Bradenton with coordination from Bradenton and the BDDA, are held at the Riverwalk. These events range from a weekly farmers' market, a seasonal "Music in the Park" family-friendly live music series, to the annual Bradenton Blues Festival and ArtSlam. The events attract 110,000 people annually to the downtown area and generate $4.4 million every year in economic impact based on the Americans for the Arts economic impact calculator.

The city also bought 1.5 acres (0.61 ha) of land north of Manatee Mineral Springs Park for $700,000 to expand the existing park and to ensure interconnectivity with the eastern expansion of the Riverwalk.

All content from Kiddle encyclopedia articles (including the article images and facts) can be freely used under Attribution-ShareAlike license, unless stated otherwise. Cite this article:
Bradenton Riverwalk Facts for Kids. Kiddle Encyclopedia.