Bonita Springs is a city in Lee County, Florida, United States. The population was 43,914 at the 2010 census. It is part of the Cape Coral-Fort Myers, Florida Metropolitan Statistical Area, on the state's southwest coast.

The city lies in the tropical climate zone, having a mean January temperature of 65 °F (18 °C). Hurricane Wilma made landfall south of Bonita Springs on October 24, 2005. 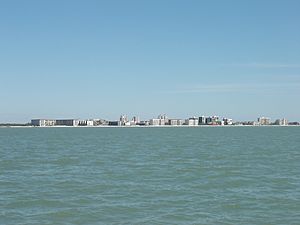 Bonita Beach, as seen from the Gulf of Mexico

While existing primarily as a retirement and second home vacation community, Bonita Springs is home to a growing number of businesses due to low business taxes, an abundance of inexpensive commercial office space, and a growing community of educated professionals.

Fixed-route bus and trolley service is provided by the Lee County Transit Department, operated as LeeTran.

Seminole Gulf Railway owns and operates a line which passes through the city. The company offers freight service and local, daytime excursions.

Bonita Springs is served by the Lee County School District.

All content from Kiddle encyclopedia articles (including the article images and facts) can be freely used under Attribution-ShareAlike license, unless stated otherwise. Cite this article:
Bonita Springs, Florida Facts for Kids. Kiddle Encyclopedia.