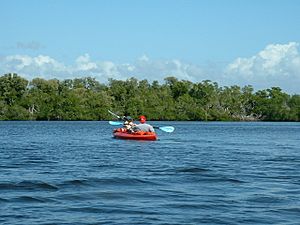 Estero Bay, Florida, is an estuary located on the west coast of the state southeast of Fort Myers Beach. The bay, an inlet of the Gulf of Mexico, is long and very shallow, and covers about 15 square miles (39 km2). Estero Bay is bordered on the west by a chain of barrier islands: Estero Island, Long Key, Lovers Key, Black Island, Big Hickory Island, and Little Hickory Island. Four outlets give access to the Gulf of Mexico: (from north to south) Matanzas Pass, Big Carlos Pass, New Pass, and Big Hickory Pass. Incorporated places on the bay include Bonita Springs and Fort Myers Beach and the unincorporated area of Estero. Two rivers, the Imperial River and the Estero River bring freshwater into the estuary. Tides play a major role in the functionality of the plant, crustaceans, mammals and fish in the area.

In December 1966, the northern half of Estero Bay was designated as the state's first aquatic preserve, the Estero Bay Preserve State Park. The southern half of the bay was added to the preserve during the 1983 Florida Legislature session.

All content from Kiddle encyclopedia articles (including the article images and facts) can be freely used under Attribution-ShareAlike license, unless stated otherwise. Cite this article:
Estero Bay (Florida) Facts for Kids. Kiddle Encyclopedia.