Captiva is a census-designated place in Lee County, Florida, United States. It is located on Captiva Island. As of 2015 the CDP had a total year-round population of 379. It is part of the Cape Coral-Fort Myers, Florida Metropolitan Statistical Area.

Captiva's many large estates, condominiums, and businesses have recovered from the serious damage due to 2004's Hurricane Charley. There is a toll to use the causeway that goes from Fort Myers to Sanibel Island. Captiva is accessed by a small bridge that crosses Blind Pass from Sanibel Island.

There were 194 households out of which 10.3% had children under the age of 18 living with them, 63.9% were married couples living together, 1.5% had a female householder with no husband present, and 32.5% were non-families. 25.3% of all households were made up of individuals and 11.9% had someone living alone who was 65 years of age or older. The average household size was 1.95 and the average family size was 2.25. 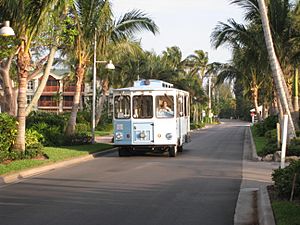 Travel, tourism and hospitality rank as the number one industry on Captiva Island (and its sister island immediately to the south, Sanibel). Noted world-famous guests to Captiva include Teddy Roosevelt, Charles Lindbergh (who regularly landed his plane on the beach in front of 'Tween Waters Inn), Anne Morrow Lindbergh and J.N. "Ding" Darling. Both the Old Captiva House restaurant and a number of guest cottages have been designated historically-significant sites by Lee County, Florida. The Wall Street Journal selected Sanibel and Captiva Islands as one of the 10 Best Places for Second Homes in 2010.

Panoramic of Captiva beach at sunrise

All content from Kiddle encyclopedia articles (including the article images and facts) can be freely used under Attribution-ShareAlike license, unless stated otherwise. Cite this article:
Captiva, Florida Facts for Kids. Kiddle Encyclopedia.