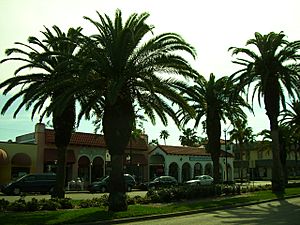 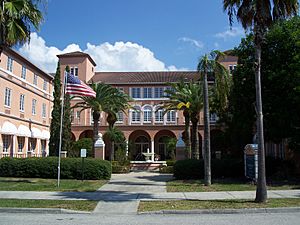 Venice is a city in Sarasota County, Florida, United States. Venice consists of a large section of mainland, as well Venice Island, which is surrounded by the man-made intercoastal waterway. The city is located south of Nokomis and north of Englewood. As of the 2010 census, the city had a population of 20,748. It is noted for its large snowbird population and was voted as a top 10 Happiest Seaside Towns by Coastal Living.

Venice is a principal city of the Bradenton-Sarasota-Venice, Florida Metropolitan Statistical Area.

In the 1870s, Richard Roberts established a homestead near Roberts Bay. In 1884, he sold a portion of his holdings to Frank Higel. Higel established a citrus operation involving the production of several lines of canned citrus items, and for the next 30 years the Higel family members were boat builders, fishermen, grove caretakers and contractors. Darwin Curry was the first postmaster. The Higel and Curry families chose the name "Venice" for their community post office, located south of Shakett Creek on what is now Portia Street in the unincorporated community of Nokomis.

The first railroad to Venice was built in 1911, paving the way for new development and expansion. Development in Venice occurred slowly, and it remained a small fishing town and farming community through the first part of the 1920s. In 1925, Dr. Fred H. Albee, a well-known orthopedic surgeon, purchased 2,916 acres (11.80 km2) of land from the Venice-Sarasota Company. Albee had previously developed Nokomis and built its first luxury hotel, known as the Pollyanna Inn. Albee retained John Nolen, a world-renowned city planner, to design a city on his land. Fred Albee, however, did not have a chance to implement his city plan before he was approached with a proposal from the Brotherhood of Locomotive Engineers to purchase his land in October 1925. The purchase was motivated by a desire by the BLE to increase the union's assets and holdings in the area.

The BLE Realty Corporation was organized to develop the area, and the Venice Company was created to market property. The company retained planner John Nolen to complete a city plan in 1926. The BLE Realty Company selected George A. Fuller as the contractor; the New York architectural firm of Walker & Gillette, as supervising architects; and Prentiss French as landscape architect. Finally on June 10, 1926, the first street in Venice opened to traffic. Nassau Street ran from its terminus at the Tamiami Trail through Venezia Park and again into the Trail. By mid-June 1926, the first phase was complete, with 6 miles (10 km) of graded streets and a mile of 7-foot-wide (2.1 m) sidewalks and gutters. The Hotel Venice (now known as Park Place on Nassau Street) opened on June 21, 1926, and residential construction in the town started in July 1926, with the construction of three large residences in the Gulf View subdivision. That same year, the city of Venice held its first town council meeting and formed the police and fire departments. Florida Governor John W. Martin appointed Edward L. Worthington as the first mayor of Venice. After annexations of surrounding areas, the state legislature changed the designation of Venice from a "town" to "city" on May 9, 1927. Venice was named after Venice, Italy.

The Venice Army Air Base was established in May 1942. The 27th Service Group was relocated from McDill Field in Tampa to provide training for support services to combat air units, and later, the 13th Fighter Squadron, 53rd Fighter Group, was transferred to Venice from Fort Myers. They were operational training units for combat fighter pilots and ground crewmen. After World War II, the city of Venice acquired the air base from the United States government, with the stipulation that it always be used for aviation or revert to federal ownership.

There were 9,680 households out of which 7.0% had children under the age of 18 living with them, 49.2% were married couples living together, 4.8% had a female householder with no husband present, and 44.6% were non-families. 40.3% of all households were made up of individuals and 30.3% had someone living alone who was 65 years of age or older. The average household size was 1.76 and the average family size was 2.25. 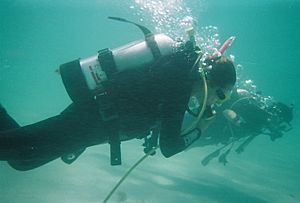 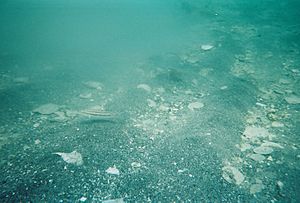 Venice has been listed in many publications as being the "Shark's Tooth Capital of the World". It hosts the Shark's Tooth Festival every year to celebrate the abundance of fossilized shark's teeth that can be found on its coastal shores.

The following structures and areas are listed on the National Register of Historic Places:

Venice is served by U.S. Highway 41, which runs north-south on the western side of Florida; Interstate 75 is a short distance east of Venice.

Passenger railroad service, served by the Seaboard Coast Line, last ran to the station in 1971, immediately prior to the Amtrak assumption of passenger rail operation. Previously Venice was one of the Florida destinations of the Orange Blossom Special.

All content from Kiddle encyclopedia articles (including the article images and facts) can be freely used under Attribution-ShareAlike license, unless stated otherwise. Cite this article:
Venice, Florida Facts for Kids. Kiddle Encyclopedia.